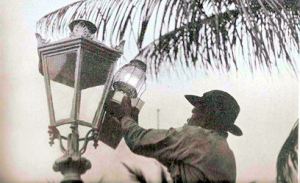 The old lamp lighter bringing you light on the issues so that you can make a decision when voting to safeguard your business interests and personal interest in the years ahead. The world will be going through turbulent times this year and the years ahead and you need qualified people to run your government. Vote WIPM.

In 1993 the Governments of Saba and St. Eustatius came to an agreement with The Netherlands after a lengthy discussion

on the concept of a “Crown Dependency” status for Saba and St. Eustatius. This article indicates what was agreed on by the then Executive Council of Saba, Commissioners Steve Hassell and  Roy Smith and I as Senator in the Parliament of the Netherlands Antilles.

Agreement reached with Minister Ernst Hirsch Ballin in The Hague in 1993.

When we reached Holland the tide had changed. There was going to be a referendum on Curacao in a few days. The Hon. Minguel Pourier called and asked Mr. Ernest Hirsch Ballin to stop the process. We told the Minister that this was a new political movement and he could not dictate for Saba and St. Eustatius. We insisted that the agreement be signed and it was done so reluctantly. The Curacao voters decided (in their own interest) to vote overwhelmingly to keep the Status Quo and the also voted Mr. Pourier into government the next year. At his parties insistence referendums were held on the other islands. The Executive Council and I met with social organizations etc. and we advised them to vote for the option to go with Holland as a Crown dependency. The people turned us back with arguments that for this reason and the other we should vote to keep the islands together. This was a strategic mistake on the part of the people who wanted to  go that route. In the end we went along and supported in 1994 the option to keep the islands together.

Continuation of the agreement reached with Minister Ernst Hirsch Ballin in 1993 in The Hague by Commissioners Steve Hassell and Roy Smith of the WIPM party.

Things got worse and worse and the islands like Saba who had graduated to a black and white television were asked to even give up that. In the end things got so bad that the National debt of the Netherlands Antilles had climbed to $2.5 billion. Much of this was owed to the Government Civil Servant Pension Fund, the Old Age Pension Fund and so on. Then St. Maarten decided that they had enough and seemingly to the surprise of the politicians there the people voted for a separate status.

Instead of they dealing with the Dutch they insisted that the other islands hold referendums as well. This took place in 2004. By then Statia had slipped the cable and decided against all the evidence that the other islands would vote to dissolve the country, Statia voted for the Antilles to remain the same as it was.

The results of the referendum put an end to the agreement which had been reached in 1993. The same Steve Hassell who had left Saba to live in the United States, and who tried to topple the Government in 2003 which I was leading took part in all the discussions with the new status.

Between 2003 and 2007 there were countless meetings with the other islands, the central government and The Netherlands about the payment of bills and the new constitutional status. Here as Commissioner of Constitutional Affairs I am presenting the then Prime Minister Etienne Ys with a copy of one of my books. This one entitled “Dreaming Big”. From Left to right: Commissioner Lisa Hassell, Roland Wilson, Island Council Member, P.P. Etienne Ys, Island Council Members Steve Hassell and Lucia Woods.

Because Holland would not pay two and one half billion dollars just so the negotiations were much tougher. However it still was a financial windfall for the small islands as all our bills were paid, we now get medical care to Colombia and so on, our Saba budget has even a reserve fund and a surplus. The Dutch Government covers the costs of education, fire department and other services which formerly had to be paid from the Island Budget.

The taxes were lowered to less than 40% while I used to pay 57% when the Netherlands Antilles were functioning as a country. Now businesses do not pay Profits Taxes and Income Tax. I still pay a substantial income tax, but we will get back to that as time goes along. All of this will change if you elect people whose Motto is MONEY, money and more Money and they think that the government coffers will be passed over to them to do with as they wish. The only change that you would get is that Holland will cut back on budgetary aid and projects. Take a look at Bonaire and Statia, several changes of government in the past four years, no projects being approved by Holland or if approved they are not being carried out. Do you want that. I am confident that the people of Saba will once again chose for STABLE government over chaos. And they will vote the WIPM back into government.  Let no one try and convince you that they were not part of the negotiations or the agreements, visits to the United Nations and so on. Honourable people will tell you: “Yes I was part of the negotiations and signed on to everything. If they do not then this article from The Chronicle you can show to them and tell them: “Man how could you lie so!”