Like the old lamp lighter the W.I.P.M. brought light and prosperity to the people of Saba. Those who have investments here. Those who came here from other countries, inform yourself well before putting your vote and the island and prosperity of Saba in danger by voting for the wrong people. We pledge to put out as much information as possible that you will know the candidates and their history before election day.

No people can master their social and economic environment unless they understand the past of that environment. History not only educates, it liberates. Let us remind you that the W.I.P.M. party was the first political party in the Dutch Windward Islands to present the people of the three islands with a program of action.

It is fitting therefore that we bring you the W.I.P.M. party program of 1971 so that you can see for yourself that the party vision of 1971 through the hard work and dedication of our party has come to pass.

In a democratic society it is the right and the responsibility of all citizens to participate in all phases of life in that society. Where this right does not exist, or when the people shirk this responsibility, the word democracy becomes a farce.

Politics is the moving force within society, and political leaders with vision can motivate society and cause social change. Everyone has the right to take part in the government (politics) of his or her country, directly or through freely chosen representatives. In these troubled times we feel that the political leadership of our country should rest in the hands of capable and responsible persons who are dedicated to the general welfare of all, and not mainly to their own personal gain and the enhancement of personal power.

The people of Saba deserve a decent and progressive government.

We appeal to you the people of Saba, in your own interest to study our program carefully, so that you may obtain an understanding of the goals, ideals and principles of this party. The W.I.P.M. will cooperate with any party or parties whose goal it is to work in the interest of the Antillean peoples in general and the people of Saba in particular, first, last and always. THE WILL OF THE PEOPLE SHALL BE THE BASIS OF OUR AUTHORITY.

This party adheres to the following principles:

To achieve this we propose that:

Our party stands for a democratic form of government. In a democracy the chosen representatives derives his strength from the support of the people, and is therefore accountable to the people. All are equal before the law (Courts) and are entitled to the protection of the law. The rights of the individual are recognized and guaranteed. Justice shall form the basis for law and order. In the exercise of our rights and freedom we should respect the rights and freedom of others.

In order to conduct the affairs of the people in a proper manner, the government needs and employs the help of civil servants. Much needs to be done to make this body function as it should.

The economy should serve the community as a whole and not just the interest of a few. It is the responsibility of the Government to create an atmosphere which is attractive to investors, while at the same time protecting the rights of labor, as labour is the most vital part of the production process.

To achieve both economic growth and social justice we would do the following: 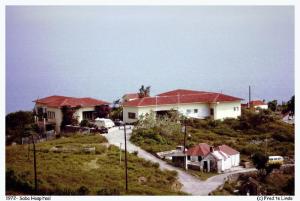 This was the former Princess Irene Hospital on St. John’s. The WIPM government as part of its party program decided to build a new Old Age Home and Hospital complex in The Bottom and to put the schools in this central location on the island. Plans for the extension are in the making and I have been appointed by the Courts to represent the landowners so that the construction can go ahead.

The health and general welfare of all the people should be a continual concern to the people.

The expected increase in population in the coming years will outstrip by far the growth of our health and welfare facilities. The skyrocketing cost of living makes life for the small salaried employee, the poor and the aged very difficult.

To correct these inequities we propose:

This is the Centre Piece of a number of sports facilities which have been provided over the years by the W.I.P.M. government. Enjoyed by one and all today.

The WIPM party brought in expert agriculturist who gave training to locals, we built the agricultural centre and had quite a bit of export of local produce to the neighbouring islands. Here picture is Mr. Johan Hop with a group of locals setting up an experimental agricultural station at the Museum and also on Booby Hill.

Locals were given every encouragement to continue our age old agricultural practices. Here is the late Bernard Johnson demonstrating his Irish potato patch on The Level.

There is a belief, which we do not share, that farming and stockbreeding are no longer possible on Saba. The reason most often given is that it does not rain as much as in the good old days. This can only be proven if the average rainfall over the years was to be compared. If records were kept this should be quite easy. We feel that such a comparison would prove this belief wrong; rain follows a certain cycle so that we get a number of relatively dry years followed by a period of rainy years.

Much can and should be done to make agriculture and stockbreeding economically feasible, by; 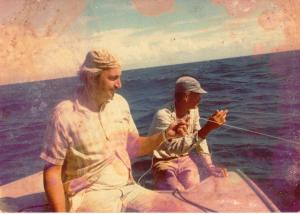 Here pictured is Guy and his cousin Howard Johnson fishing in the traditional way on the Saba Bank. The WIPM had the law arranged to protect the Saba Bank by the Coast Guard. Before that there were fishing fleets coming from the surrounding countries and fishing the Saba Bank dry.

Fish is one of the oldest foods known to man; man fished before he kept animals or farmed. Fish later lost its great importance as food for the vast majority of mankind, but today as the exploding world population threatens the world with mass starvation in many areas; man is once more turning to the sea and rivers as a valuable and relatively cheap source of food.

Fish is not only tasty, but has a high food value. Food elements in fish are protein, fat, vitamins and minerals (e.g. iron, magnesium, copper, calcium etc.).

Yet this valuable source of food, which also can be made an economical asset, like farming and stockbreeding has been totally neglected by government so far. At the moment Saba produces little in the line of food, almost all foods are imported. 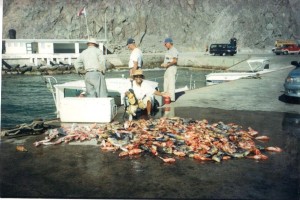 The WIPM party took over the government of Saba in 1971 and in November 1972 history was mad with the inauguration of the Capt. Leo Chance pier, pictured here with Bernard Johnson and others coming in from the Saba Bank with a nice catch of fish!!

This poses a great danger to the people of Saba, besides being very expensive; a prolonged shipping strike in the USA would gravely affect the food situation in Saba and even the economy of the island, since the tourists do not come here to starve. And in the case of war, with Saba being at the present time dependent on the outside world for almost all its food purposes, people would most surely starve.

In order to promote a fishing industry here we propose to request technical and financial assistance by Holland: 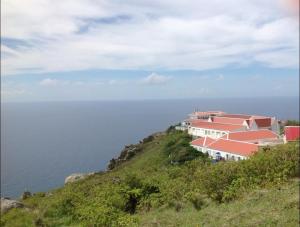 This is only part of the school complex on St. John’s which the WIPM government built to replace the hospital and to centralize the schools in one location. The WIPM party has a vision for Saba and much has been accomplished already. Thanks to this school we have a number of Sabans who passed through this school who went on to achieve University diploma’s. Now you the voters are being asked to sacrifice your children on the altar of ignorance by some who are pretending that you don’t need an education to run a government. Believe that and put yourself back in the stone age.

Education is one of the most important areas of the government responsibility (both public and private). This is even more important in a developing country, for education is the key to progress.

We are of the opinion that:

2. All education should be free, from kindergarten through high school.

3. Elementary education should be made compulsory. (That too was achieved during my term as Senator).

10. In order to achieve some of the aforementioned points the W.I.P.M. of Saba is requesting that the private schools take care of all children on the island from 1st to 7th grade and the Public School be turned into a MAVO (high school). This we will submit to the board of education in Curacao for approval after consultation with our local teachers and in a parents committee. (This too has been achieved under the WIPM government, just take a look at St. John’s, where the old hospital used to be, and a new hospital was built in The Bottom and we moved the schools to St. John’s. Where there is no vision the people perish.}

Our object therefore is not just to attain political power, but to introduce new standards of conduct into politics; to place the welfare of the total community above our own personal welfare, and the welfare of a chosen few. We intend to use the power entrusted to us by the people in a just manner.

We do not believe that order, respect for authority and peace in our community can be achieved or maintained indefinitely through a blatant of and an indiscriminate use of force.

Peace is more than just THE ABSENCE OF WAR; the existence of order lies on a higher plane than the enforcement of order. We seek to create an order based on Justice. We reject extremism not just the extremism, of the poor and underprivileged, but also of the rich and the powerful. We recognize that when an immovable object meets an irresistible force, something has got to give.

The extremism of the poor, labor and youth is but a reaction to the centuries old extremism of the rich, the educated, the political perverts, to their indifference, and lack of sensitivity, and to their blatant exploitation and disdain of the vast number of their less fortunate fellowmen’ to their me-first-attitude, and to their elevation of PROFIT as man’s primary motive.

The WIPM party when it was established in 1971 promised to bring light to the people of Saba and we brought light, prosperity to our people. We have no regret for doing this and most if not all of our people have benefited by this. We ask you to continue the trust in our WIPM party and on March 18th, vote for your investments on Saba, vote for continued progress and for the future of your children. VOTE WIPM.

The eminent French Philosopher Jean Jacques Rousseau wrote long ago: No citizen should be so rich as to be able to buy another man, nor should any man be so poor as to be forced to sell himself.” We therefore appeal to all citizens of our community to join us in creating a JUST society, for: WE ARE INDEED OUR BROTHER’s KEEPER.