I used to wonder why Miss Elsie as we called her gave her son this name. As you might know all the countries ending with Stan, like Pakistan, Afghanistan and so on, the name means Land of.

However I found out when researching this name that there had been a King Athelstan. I now wonder how come I did not know that. The Saba people most of whom had their ancestry in Britain, Scotland and Ireland, in former times, would look to their ancient Kings for names to give their children.

The original. In former times Sabans looked to the Kings of their ancestors to name their sons by in order to give them ambition.

King Athelstan was King of the Anglo Saxons from 924 to 927 and the first King of all England from 927 to 939. He was the son of King Edward the Elder and his first wife Ecgwynn. He was the grandson of King Alfred the Great. A distinguished and courageous soldier he pushed the boundaries of the Kingdom to the furthest extent they had reached in 927 AD. He died childless on October 27th 939.

While our own Athelstan did not make it to be King, he was a King in his own way as he made it to the position of Captain a much wished for position of the young men of Saba in former times.

So as you can see Athelstan had that captain business in his blood from both sides of the family. And not only from the men in the family but when you read an interview with Miss Elsie from Saba Silhouettes you will see that she loved the sea herself and her sister Oceana [Miss Ocie] got that name because she was born at sea.

“[Father was] sailing out in a big ship. The name of the ship was the R.L.T. No more name. R.L.T. flied the American flag. A square rig like they calls the ships, you know. She was made different to a schooner, yeah. He was captain, captain of the ship.

And we went to America in that said ship [R.L.T.]. I was a girl only twelve years old, [Doce] must’ve been nineteen or so. I can’t really remember her age. My brother Johnny Ben was with us, but not the others. They was out in other places working. Some was too small to go, a couple was out to work. Our mother wasn’t there then. 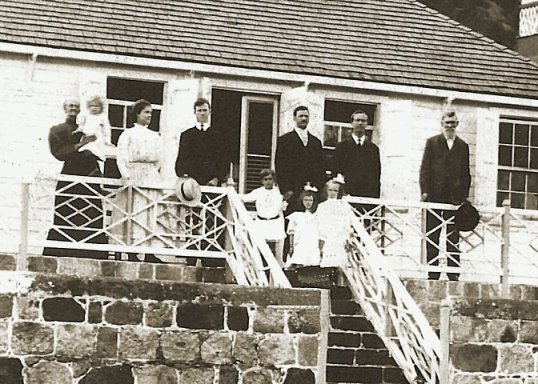 On the left the baby the lady is holding is Atlestan. Family portrait of the home of Captain Josiah Peterson Sr. on the right. This home is now the Museum.

We came out, we went straight to America, and it took us eight days to go. Not seasick. My sister threw up for three days. I was just as a sailor. I used to eat plenty, too, on board that ship, and I would just eat and eat. My father was a big husky man, you know, and he sat and watched me. My sister would say, “oh, if I could only eat like you!’ I said, “Well, you get up and eat.”

In America [New York] we went all about, all over the place, you know to look at different places and see different things.

“We remained on the ship; fifteen days in New York and then he came out. You see, we wanted to go. Me and my sister wanted to go, to go to the Brazils. And we was foolish too cause we had a long passage going there on the ship, and he didn’t go there. He came back to Suriname. And it was mangoes we ate there too. My sister then had broke seasickness, and she ate her share too.

S.S. Ponca City one of the many ships [mostly oil tankers] of which Athlestan was the captain.

And we went then to an island called Connetable Island. That’s somewhere by Cayenne. It was a small island. It was a little small island. And an old man Miss Elaine [Hassell’s] great grandfather sailed in a li’l schooner up around there; and this day my father was on the ship. He went there – I’m forgot what he went there to take in for cargo. That I can’t really remember. And he went, and the old man, Miss Elaine’s great grandfather, called to tell him the rats had eaten up all his food. Yes. And he asked my father if he had anything to give him to eat. “Oh, yes.’ He said, ‘I have lots!’ And he got down in his li’l boat, and he come to where my father’s ship was; and he filled up a big basket of foodstuffs and gave him and he went. “Now,” he says, I’.  All right till tomorrow. I won’t put this where the rats can get at It.!”

In 1967 I met Captain Athelstan in Tom’s Bar in Richmond Hill, Queens New York. Tom’s bar was a hole in the wall sort of place with a pool room in the back. The Sabans used to hang out there. My cousins who worked on the dredges all over the place and others like my good friend Norman Hassell a very successful contractor would frequent the bar to see and converse with other men from Saba. I was there on vacation from St. Maarten and was introduced to Tom’s bar by my cousins. It was a short walk from where I was staying with my aunt Alice Simmons and her husband Stanley Johnson. At the time I was not much into writing or researching the history of Saba and its people and I regret that I did not interview him about his career at sea and his early days on Saba.

S.S. ‘Swiftsure’ on which he sailed as Chief Mate along the United States coastline

However I came across a letter to me from Gail Peterson- McManamy and she gave me more details on her father which I will share with you.

Over the years of correspondence with people living in different countries with roots from these islands I have accumulated quite an archive. And when I look back on my many letters I now appreciate the fact that I did that.

To Will Johnson. “I am Gail Peterson McManamy. My father, Athelstan, so on Elsie and ‘Petey’ Peterson was born (1909) and raised on Saba. His childhood home, in Windward Side, is now, I believe, the Museum dedicated to the lore of this island. He too was a sea captain. He was schooled to approximately the 7th grade on Saba then was sent to Puerto Rico to continue.

A story I recall is that he was an able bodied seaman at the time that the ‘Morro Castle’ burned. He was studying for his next test to change his position and move up the ladder of seamen.

My dad sailed (Merchant Marine) during World War II, his ship having been converted to a troop carrier. He then returned stateside and sailed from Providence Rhode Island while I was a child. The runs I do remember were for Marine Transport, some of his ships names: The Ponca City, the R.E. Wilson, (for Union Carbide) and Carbide ‘Texas City’. He sailed between Carteret New Jersey and Texas City, Texas.

My dad died in November 1971. He was one of nine children, 5 brothers, and 4 sisters. His sisters married family names such as Leverock and other Petersons. My mother’s maiden name was Hassell. Her father was Johannes Hassell also of Saba. He was one of the men who moved to Providence, Rhode Island, where he was introduced to his bride Lettitia Barnett from Ireland. They had a son also whose name was James Mervin Hassell. I noted the name James Hassell in the list of early settlers.

When I visited Saba for the first time in 1964 I stayed in my grandmother’s house. There was the Frigidaire you write of, a huge cistern of water with a paint bucket to draw it out. There was no electricity during the day but for about 5 to 6 hours in the evening, run off generators. My family and I went to the movies one night. The film, ‘Mutiny on the Bounty’ was being shown. It cost a quarter to get in and the screen was a white sheet hanging on the wall. At 11.00PM the projector stopped running as the electricity had gone off for the night. We all trooped back the second night to conclude the film. Perhaps that is why the families numbered 5 to 10 children easily! There were 3 telephones on the entire island that connected to each other. To call off the island you had to make the arrangements a day or so ahead of time. 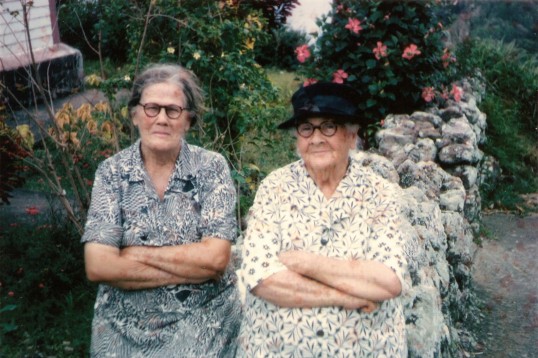 My uncle Kenneth built the first large scaled refrigeration near his home. We had flown onto the island via a small Piper Cub (after having flown first to St. Thomas, then to St. Martin) piloted by Monsieur Le Pipe [Jose Dormoi] featured at one time in Life Magazine. The plane crashed in Statia during hurricane Faith. To leave, we were pushed off the rocky beach area of Fort Bay and rowed out to a 100 year old boat captained by a man known only to me as Randolph [Dunkin]. We were crossing to St. Martin, a 15 minute air ride, as opposed to the day long journey in high seas. I was too seasick and covered by a tarp, to really note or care. I do remember ‘coming to’ in the calm pretty waters of St. Martin. I have not been back to Saba but have promised myself and my son to do so. He is the one who found your book and now we are anxious to buy it and learn more about our heritage.”

As recently as 2013 there was a correspondence between ‘Of Saban Descent’ and Mr. Scott Thompson, son of Gail. He mentions some of the ships of which his grandfather was Captain. They were: S.S.’Malabar’, the S.S.’Ardmore’, the S.S. ‘Muskogee’ the S.S. ‘Swiftsure’ [ made numerous voyages on this ship-all as Chief Mate, all were coastline voyages.]

And so we salute Captain Athelstan Peterson another Saban of the past who did us proud.