Peter Every had so many stories of a life at sea which when I have time I will be posting. He was one of a kind. He spent his last years as a house painter, a profession which many retired seamen which pick up.

” Well you know when I was a boy growing up, I used to be with those people there Under the Hill. Mr. Carl Hassell and their family lived Under The Hill. We used to be around there with them, making messages and doing from one thing to the other for them.

So I says to him one day, he was in, I said, ‘Captain Ben, I’d like to go aboard the vessel. He said, ‘Go aboard the vessel for what? I said,” Well I don’t know. Everybody got to go to learn.’ He said, ‘Well if you wants to go to learn, ‘he says, ‘I’ll carry you’. And he says, ‘Well, we’s going away Thursday, so go up and tell your mother to get your clothes ready and go aboard.’ 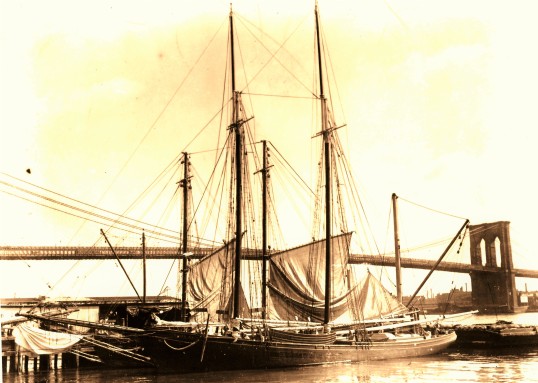 The schooner Esther Anita one of the many fine schooners owned by Captain Ben Hassell here in New York harbour in 1915. Back then Saba schooners would be going regularly to New York.

So I went home, and I told my old lady. I said “Well I’m asked Captain Ben to carry me with him on the vessel, and he’s told me to get ready. He’s going back a Thursday. ‘ She said, ‘My boy, you’s too small.’ ‘Oh I said, ‘ Why that ain’t nothing you got to grow.

Well, anyhow, I decided to go. And I went aboard, and there was two other young boys there besides myself, and they said ‘Peter, you think you’s goin’ to make it?” ‘Well, I,m going to try. I’m agoin to try.’

The ‘Three Sisters’ in Curacao harbour. Named after three daughters of Captain Abram Hassell brother of Captain Ben. Abram lived in Rhode Island and would buy schooners and bring them out to the West Indies and sell them. This one was owned by Capt. Ben and his brothers Carl, Capt. Tommy and Abram.

‘He Captain Ben [Hassell] turned to the mate one day and he says,’Well, Tom, you know what’s happened? We’s going to Demarara tomorrow for a load of shingles and when we comes back to Barbados the vessel is going to Cuba to carry emigrants.’