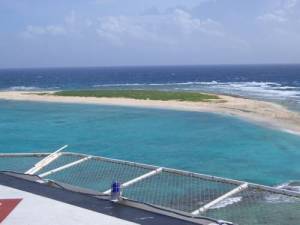 Quite a lot has been written about Aves Island known to us on Saba as “Bird Island” as well. That does not mean that the last word has been said on the former Dutch claim to the island. I hope that perhaps Walter Hillebrand can write a book about Aves with nice photographs and so on. I am willing to share the documentation I have found with him.
The last time I can remember anyone going to ‘Bird Island’ was a mixed crew from Hell’s Gate and The Bottom with Capt. Matthew Levenston. That would have been in the early nineteen fifties and I remember them with some large turtles, corned fish and even birds.
Saba did not give up its rights to the island without a fight. The Dutch did. At his own expense Lt. Governor Edward beaks financed several expeditions to the island when citizens of the United States were taking away the guano that was there. Lt. Governor Beaks had a hard time to get reimbursed for the expenses he had. Some years after Lt. Governor Edward Beaks was fighting to save the island, the Dutch put a Venezuelan challenge to the island up for arbitration with Spain. Of course Spain ruled in favour of Venezuela.
Sabans by that same decision were granted the right to continue to fish there and they did so until the nineteen fifties. Even though we do not use that right Venezuela should be reminded by the Dutch of that. Perhaps we can trade that right for some cheap oil and cooking gas for our people.
My grandfather James Horton Simmons got stranded there around 1880. A schooner had dropped them off but got lost on the way to Guyana and it was several weeks before another schooner picked them up. My grandfather was credited with introducing canned corned beef to the island. A steamer passing by Aves on its way to Europe left some cases of corned beef with them. They had seen a distress flag and stopped at the island to investigate. When my grandfather and the others introduced the remaining canned corned beef to the island it became a hit on Saba and has remained so to this day. 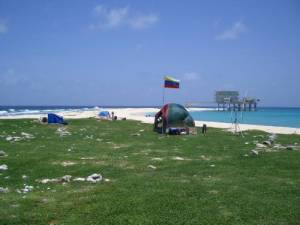 Lt. Governor Beaks correspondence with the Governor on Curacao as well as the supporting reports from Captains and old Saba residents give an interesting history from the Saba perspective. Very old charts showed the island as connected to the Saba Bank. Severe hurricanes such as the category 5 hurricane of 31 August 1772 known as the ‘Great Hurricane’ may have broken through the sandbank connecting the two. Also remarkable is the fact that Sabans were birding and turtling there even before that hurricane as is evidenced from the correspondence.
Once I was a guest at the military headquarters in Caracas Venezuela. I saw a booklet in Spanish on the Aves Island on the desk of the Commander and asked where I could buy a copy. On leaving the reception the General called me aside and gave me something gift wrapped. On arriving at my hotel when I opened the gift it was the booklet signed by the General himself. Nowadays much information on Aves can be found on the internet I guess.
For the record here follows some of the correspondence between Saba and the Governor on Curacao.
Saba, 5th February 1859
To His Excellency
The Governor of Curacao and Dependencies
Etc.etc.etc.
Sir,
I have the honour to acknowledge the receipt of Your Excellency’s communication of the 8th ulto. Accompanying copy of a letter to Your Excellency of the 28th December 1858 from P. van Rees Esq. H. M. Commissioner, whereby information is asked on certain points, of the eldest inhabitants of this island and myself relative to the Isle of Aves, in order to establish the right of the Netherlands to said island etc.etc.
In reply thereto, I beg leave respectfully, to send herewith to Your Excellency, copies of nine declarations given in my presence, by persons residing in different districts, which I trust will be found satisfactory, as answers to questions No. 1 to 3.
Concerning question No. 4 I regret that I cannot further reply to, than by forwarding herewith to Your Excellency a chart of 1754, by which will be seen a Bank which I presume, is the one alluded to, in said question No. 4 there being no documents, in the archives relative to the Isle of Aves.
With regard to question No. 5 I ask leave to state to Your Excellency, that to the best of my knowledge, persons of this island, have annually for many years, been visiting the Isle of Aves, for the purpose of obtaining eggs, turtles and fish, and have never been prevented doing so by any person, of any nation whatsoever. And that I have always understood, that there exists a Bank that unites this island with the Isle of Aves.
The inhabitants of this island, that followed the aforesaid employment, found it, in general, a lucrative one.
I respectfully trust that the documents, which I have the honour of forwarding herewith, to Your Excellency, will materially aid, in establishing the right of the Netherlands to the Isle of Aves.
With the highest respect, I have the honour to be, Your Excellency’s most obedient and very humble servant, The Lt. Governor of Saba. Edward Beaks.
Excerpts from some of the nine declarations made.
District; Windwardside. No. 1
I the undersigned, Peter James Every, aged 81 years, native and resident of this island. Do hereby certify and declare, that I sailed on board the Dutch sloop ‘Suffererdonda’ Commanded by Matthew Winfield, in the year 1778 and we visited the Isle of Aves in said year, and from thence to this island several persons who were placed there for the purpose of obtaining eggs, turtles and fish, from here.
I also declare that my uncles John Every, Peter Hassell, and Henry Hassell (deceased) informed me, that they also attended persons from this island, placed on said island, during the time they sailed on board certain vessels from this island, previous to the time above stated 1788, and to the best of my knowledge, persons from this island have been visiting the said Isle of Aves annually for 55 years or upwards 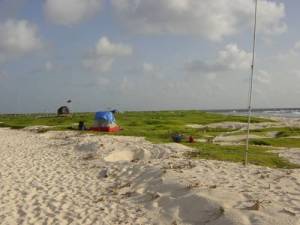 My grandfather James Horton Simmons and many other Saba men would sleep here for weeks on end catching turtles, fish and birds. 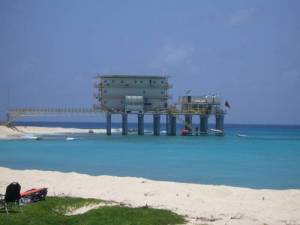 THE Venezuelan research station which was taken out in one of the many hurricanes in the past thirty years.