The Legacy of Johnny Leverock 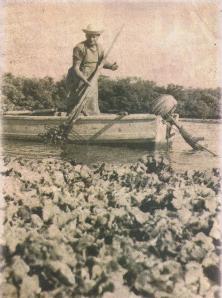 The Legacy of Johnny Leverock

Mr Paul Pfanstiehl son of Dr. Pfanstiehl and one of the Vanterpools sent me an article from the business section of The Times of Sunday March 16th, 1997.

Years ago at Little Bay Hotel I met John Alfred Leverock and his Ohio wife Bertha, at the Little Bay Hotel where they were staying on their way to Saba. He told me about his restaurant in Flordia and that every year or so he would order a “tire” hat from Rebecca Levenstone as a reminder of his native Saba. He was from a large family in the village of St. John’s, eleven or twelve children if I am not mistaken. His parents were John Leverock and Alice Hassell. They were married on August 1st 1900 and he was their first born, namely born on Friday April 5th, 1901.

As a cabin boy at the age of 10 he left on a sailing ship and headed for the USA. He served in WWI, WWII and the Korean War; he was an aviator in the flying circus. By the end of the conflict he was commissioned a Commander in the Merchant Marines internationally licensed to command any ship of the World. His great niece Kalena Leverock (granddaughter of James Hassell Leverock) has lots of information about this branch of the Leverock family. She tells me that even though she was born and raised in the United States that her lifelong dream has been to one day come to Saba.

In the Times article written by Kris Hundley, they tell us the following about this successful man. “The local seafood chain has based its success on moderate prices and fresh seafood. But Leverock’s owners, planning expansion, have realized what a marketing gem they have in the story of the colourful restaurant founder

When Johnny Leverock died more than 20 years ago (1976) his wake and funeral were held right where he wanted: next to the oyster bar in his Pinellas Park restaurant.

Strange by most standards, but perfectly normal for Leverock, who defied convention all his 75 years.

Johnny Leverock didn’t just own an oyster bar. He practically lived there. Drink in hand and straw hat on his head (made by Rebecca Levenstone for him), Johnny was in the place every night, making sure customers enjoyed the oysters he had harvested from Tampa Bay. And when he decided to get some shut-eye, Johnny often headed to an apartment he had upstairs.

From 1948 when he opened the restaurant to his death in 1976 Johnny was Leverock,s. The restaurant, first called Johnny Leverock’s Oyster bar, lived on and grew into the Leverock’s Seafood House chain. But the memory of the man who started the business faded.

Now, Johnny is making a comeback. His name is back on the signs, which says Johnny Leverock’s Seafood House. And his picture is being plastered on the menus and walls. Leverock’s owners say Johnny was the obvious choice to lead the marketing campaign. “Johnny was quite a flamboyant character,” said George Lewis, president of Leverock’s Restaurant Corp. “We realized we have a great asset in our history here. Why not use it?”

The chain plans to take Johnny’s story along as it expands into other Florida markets. Within 12 months, Leverock’s intends to open one company restaurant and about four franchised units, adding to its seven restaurants in Pasco, Pinellas and Manatee counties. Potential markets include Hillsborough County, Fort Meyers, Orlando and Daytona Beach.

Within four years, Leverock’s expects to have more than 35 restaurants throughout the state. After that it will consider expanding throughout the Southeast.

“If anything, we’ve been ultra-conservative in our expansion so far said Lewis. “Now we’re ready to grow, and we think franchising will help us meet our goals.”

If Leverock’s can replicate its local performance, it will be a phenomenal success. The chain’s existing restaurants average sales of $3.2 million each. That’s more than six times the national average for sales at a full service restaurant.

But expansion comes with plenty of risk. Six of Leverock’s seven existing locations are on the water – a major customer draw – but much of the chain’s growth will be in landlocked markets. And the chain has never worked with franchises before. Plenty of restaurants have thrived in their hometowns before falling after too-rapid growth. And running a seafood restaurant has its own set of challenges, because your reputation depends on the availability of fresh fish.

Leverock’s has beaten the odds so far. A supply of fresh fish is guaranteed through one of the chain’s partners. New servers are put through intensive training. And prices – all important in a retiree market – remain moderate. In 1996 gross revenues of Leverock’s was $22.5 million.

Within four years, Leverock’s plans to have 25 of its 35 restaurants run by franchisees. But will the franchisees fumble Leverock’s formula? Can the owners keep up quality in far-flung locations? And removed from the water, will Leverock’s still be a magnet for diners? The chain’s owners are betting Johnny’s persona can set their restaurants apart. And Johnny himself probably would admire them for taking a chance: After all, the Leverock concept started with a well placed bet in a poker game.

Johnny, a native of the Dutch West Indies, came to Pinellas County in the 1920’s and set up a gas station on US 19, just South of where Pinellas Square Mall now sits. The station was the site of more than one friendly poker game.

During a game of five-card stud in the late 1940’s an Apalachicola fisherman put up his oyster beds in Tampa Bay to back a bet. Johnny took them away with a full house. The oyster bed covered all of 7 acres in Tampa Bay and very soon he was harvesting 15.000 bushels a year.

Leverock who had been on the water all his life, started raking the oysters in his beat-up skiff and selling the harvest next to his pumps. Before long, there were more customers for oysters than for gas.

Leverock took note: The gas station came down and was replaced by Johnny Leverock’s Oyster Bar, which became a local institution.

By the time John Stross and Dick Tappan bought the restaurant from Johnny’s family in 1981, sales had dwindled. The new owners changed the name to Leverock’s Seafood House and put money into marketing. In three years, sales tripled.

By 1991, six more Leverock,s had opened from New Port Richey to Brandenton and three more partners were brought in. Over the years, the team fine-tuned the Leverock’s formula: fresh fish at moderate prices in waterfront locations. The mostly tourist crowd outside Leverock’s in St. Pete Beach last Wednesday night attests to the chain’s popularity. Despite a 90 minute wait for a table – diners are given a beeper so they can roam while they wait- these customers swore by the chain. “We had the seafood platter and the white fish was just perfect – lightly coated and flaky,” said Margery Sperlik of Grand Rapids, Mic. “And the salad was great.” Bill Baker from Union City, Ind., said he and his wife make Leverock’s a regular stop during their three-months stays in St. Pete Beach. “We visit Leverock’s at least every couple weeks,” said Baker, who added that it’s not the seafood that’s the attraction to him. “I always get the steak, but my wife gets the shrimp.”

The well-known John Gumbs who had a large trading house in Basseterre, St. Kitts, was married to not one and not two, but three of Johnny’s sisters I am told. When one sister died he would marry the other. There are still descendants of the large Leverock family around the Windward Islands. The late Lyman Halley was a nephew of Johnny as well and Marilyn Sagers-Leverock on Saba is a niece. Those Leverock’s seemed to like large families. I grew up with a Leverock family living just below where we lived in Windwardside. A family of 11 children and they all ended up in the United States but I still have contact with them especially now that we have Facebook.

One more in the chain of Johnny Leverock’s Restaurants

While in the process of typing this article I decided to go on the Internet and check on Leverock’s restaurants and they seem to be still thriving. Leverock’s edge in seafood is due in part (1997) to the tremendous volume the chain orders. About 50 percent of the fish sold at Leverock’s is fresh, a figure that’s increased over the past three years. Some of that supply comes through Dick’s Seafood, a distributor with a fleet of 30 boats in Madeira Beach that’s owned by Leverock’s partner Dick Tappan.

The renovation, complete in St. Pete Beach and scheduled for other restaurants over the next few months, plays up the chain’s Florida ties, as well as the Johnny Leverock connection. Gone is Leverock’s drab-grey exterior, traded for a bright yellow motif with a green roof. A spruced up Model-T truck with the Leverock’s logo sits in the parking lot.

Inside the St. Pete Beach restaurant, there’s a fresh-fish display case in the lobby, a window-wall into the kitchen and plenty of Florida fishing mementos.

The walls are packed with black-and-white photos of Johnny – in his skiff, drinking with local politicians showing off a prize jewfish. And one room, with faux oyster beds along the ceiling, is dedicated to the chain’s founder. Leverock’s patrons, some 22.000 of whom are members of the chain’s diners club, expect consistency, Lewis said.

And so once again we are proud to present our readers with a small island boy who never forgot little Saba the island of his birth and the large Leverock family from which he sprang and who went on to become a successful businessman in the United States.