Mail Service (Three)
By: Will Johnson 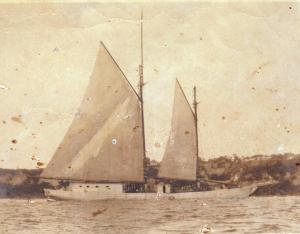 The “Mayflower” in Statia’s harbour. Owned by Capt. T.C. Vanterpool and one of her captains was Charles Reuben Simmons of Hell’s Gate. 1920’s.

After 1912 the islands were back to schooner service. Shortly thereafter World War I started.
Although the Dutch Government was neutral the islanders were perceived to be sympathetic to the Germans. The owners of the schooners were mostly from Saba and were accused of trading with the German submarines. A newspaper from Guyana quoted Sir Winston Churchill of making that accusation. According to my old friend Elias Richardson, then a police officer on Saba, after the war one of the famous submarine captains Count Felix Graf von Luckner b. Dresden 9 June 1881, died Malmo Sweden, 13 April 1966 on July 7th, 193t, visited Saba to thank some of the old captains. I have a copy of an autographed photo of him which he left behind when he visited here in the nineteen thirties. He was known as the Sea-Devil and his crew ‘The Emperor’s Pirates’. He commanded a large three master schooner the SMS ‘Sea Eagle’ (1916-1917). He sunk many ships and caused no casualties. 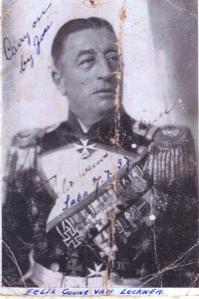 Count Felix van Lockner was provisioned in World War 1 by Saban captains. He visited Saba to thank them.

Despite the war the Governor on Curacao continued to search for a solution to the transportation problem between the islands. 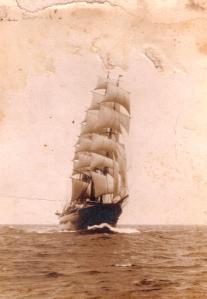 In a letter to His Excellency the Governor dated 22 January 1916, the Administrator of Finance suggested that a subsidy of fls.30.000,– per year and at most forty thousand, should be sufficient to cover the costs of the mail service by steamship, as it now costs the government fls.15.000 per years for the schooner service.
In a letter dated 19th May 1917 from the Lt. Governor of St.Eustatius to His Excellency the Governor of the colony Curacao he indicated that they were becoming worried over the total dependency on St. Kitts and the fact that some of the ships calling there, among them the “Corona”, and one of the Canadian ships may be taken out of service. The Quebec Lines sailed between St. Kitts and New York with stops at Bermuda. This line was very convenient for Windward Islanders back then. Among those ships were the “Corona”, the “Perema” and the “Guyana.” In the Ellis Island records in New York harbour one can find records of many of the people from these islands who entered the United States through that port. Just as a curiosity. In doing research between the twenty odd million people who entered through that port in a fifty year period 99.9% of the Lejuez’ were from St. Maarten and the same goes for the Leverock’s of Saba. 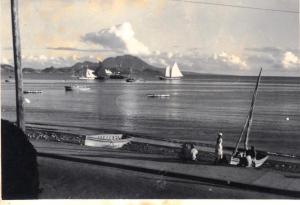 The Lt.Governor of St. Eustatius quotes the “St.Kitts-Nevis Daily Bulletin” of Friday May 18th, 1917 as stating:
“The small islands of Anguilla, St.Maarten, Saba and St.Eustatius all depend on St. Kitts for food supplies as steamers do not call at their ports. When our food stuff cargoes are short for want of grace, these islands also suffer by reason of this port being the distribution center.
The food question is becoming a very serious matter and if one of the United Steamships is taken off this route, the situation will become still more acute. We can quite realize the difficulties, which exist in the distribution of vessels of the merchant service but, we hope, that the claims of the West Indian Islands for protection from starvation will be given some consideration by the British or American governments.”
In 1917 the Johnson Line from Sweden offered to do the mail service but nothing came out of that as well as several other offers including the Philadelphia Shipping Company.
In a letter dated 24th October 1917 from the Lt. Governor of St.Eustatius he informed His Excellency the Governor that the situation was getting worse. Captain Ben Hassell of Saba who had brought him shingles from Demarara had informed him that that country would no longer be exporting to these islands. Also, that the export of sugar (Sugar Prohibition Order 1917) had come into effect lately in St. Kitts and Nevis. Especially the muscavado sugar is sorely missed. 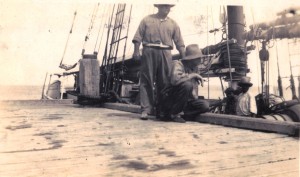 Capt. William Benjamin Hassell standing with “Tomma” Johnson seated on one of his schooners in Bonaire.

In a report from His Excellency the Governor dated November 5th, 1917 he stated that the Lt. Governor of Saba had recently been to Curacao on the schooner “Estelle” and that Saba and St.Maarten were not having any difficulties with imports from the British islands. He stated that Mr. Henry Hassell Johnson, one of the largest importers on St.Eustatius, was being refused goods from the British islands because he was known as being hostile to the entente powers. In other words he was a German sympathizer in World War I. 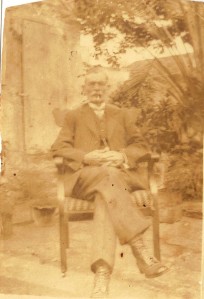 Henry Hassell Johnson left Saba at the age of 12, barefoot and illiterate to be a goat herder on St. Eustatius for the Every family. By the time he was in his twenties he was the wealthiestt man on that island and could walk from the Caribbean side of the island to the Atlantic without having to step on any one else’s property.

On November 21st, 1917, the Lt. Governor of St.Eustatius denied that Mr. Henry H. Johnson was having any difficulties with imports because of his sympathy towards the Germans and that he, Johnson, had proven this to him. The problem was that St. Kitts itself was short on imports, but that small quantities of sugar were again being exported to St. Eustatius.
After much correspondence back and forth and proposals to have steamers of the Royal Mail Service do the run, the Minister of colonies decided in 1918 to have two schooners built for the purpose.
The Governor did not feel much for the proposal. Also there was a report from Mr. Jansen of the Curacao Petroleum Company (SHELL) which in 1915 had started a complex on Curacao which was to become the largest oil refinery in the world. Mr. Jansen said that the schooner “Estelle” which was a fast sailer had been giving excellent service to these islands. He suggested to continue with the “Estelle” until the war was over and then to build a steamer of 150 to 200 tons capacity with accommodations for 15 passengers.
His Excellency the Governor in a detailed report on March 16th, 1918, informed the Minister of Colonies in The Hague of the problems connected with the building of two schooners, and said that we could wait for better communications between the islands until the war was over. He further stated:” For the service to the Windward Islands we have an excellent schooner chartered the “Estelle” for fls.24.000.—per year. Although this is a privately owned schooner, in my opinion it is far better doing it this way and less costly than if the schooner was owned by the government. This service can suffice until after the war that a steamer can be built.”
The Minister of Colonies Mr. Pleyte did not give up that easy. In a lengthy report to Governor Nuyens of 2 April 1918 he complained about the high costs of hiring the schooner “Estelle” which had gone from f.1000.—to f.1.250.—and then to f.2.000.—per month in less than two years. He said that his offices could get the American government to release quality lumber for the purpose of building two large schooners. He also suggested that government officials visit the islands more often and that the two schooners, one servicing the Leewards and one the Windwards would also provide good inter-island communications, and that these two schooners could alternate in the once a month across the Caribbean trade between the two island groups. 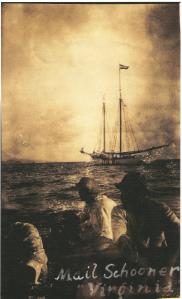 Mail schooner the “Virginia” owned by Capt. Abram Mardenborough of Saba but who married Miss Ohney Wathey and resided on St. Martin.

On August 2nd, 1918 the Governor wrote back to the Minister of Colonies that indeed in normal times the price being paid to the owner of the “Estelle” would be considered high but he must remember the world was at war. He stated that the “Dreadnought” a sister ship of the “Estelle” and also belonging to Capt. Thomas Charles Vanterpool of Saba was being hired out to a Cuban for fls. 4.000.—per month.
He further stated: “I recently was requested by telegram to hire a schooner to transport corn from La Guaira. I could get two schooners about 200 tons each for f.10.000.- each for the trip, but the owners insisted that they should use the ships for themselves on the return. The “Estelle” nowadays could earn a lot more money than it is receiving as a subsidy from the government. However the owner lives on Saba and therefore prefers this run above other runs, whereby he would lose the opportunity to be often at home. In addition he is hoping to be able to keep his vessel on this run for as long as possible. If the government started to build its own schooners, then he would probably try to profit as much as possible from the opportunities now available and cancel the contract. This would bring us into great difficulties. At the moment we cannot do without the services of a ship which makes the trip between Curacao and the Windward Islands. Any moment Curacao can be the only place from which St.Maarten, Saba and St.Eustatius get their supplies. St. Kitts and St.Thomas on more than one occasion have prohibited exports whereby our Windward Islands found themselves in great difficulties. 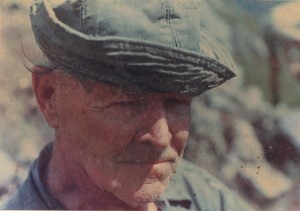 Capt. Charles Reuben Simmons. Among others he was captain of the “Mayflower” and traded with Curacao.

“On January 18th, 1918 the Governor of the British Leeward Islands cabled me as follows: “Governor Dutch St.Maarten asks me to inform you that owing to prohibition of exports, foodstuffs from St. Kitts, situation in St.Maarten is very grave and famine is threatened. He asks you to send him immediately from Curacao a special vessel with food supplies. I deeply regret that owing to shortage of foodstuffs in these islands I cannot come to his assistance.”
“Fortunately the “Estelle” which returned here from the Windward Islands, could carry food supplies back, because there was no other vessel available at the time. For a period of several months Curacao supplied the Windward Islands with the most important food supplies, which worry us a lot because many times supplies here were also very scant. It was therefore of incalculable value that we had a vessel that could transport the required amounts each month.” So far His Excellency the Governor. 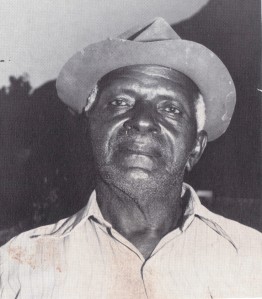 Sailor Peter Every. We have a separate story of his life. He sailed with Capt. Ben Hassell. He said that he wanted to sail to get fat like his uncles who sailed on four master schooners.

In the continuation of this article we will cover the period just after World War I when the schooner trade continued between the islands.
(To be continued.).