As was mentioned in part one of this story, before the Governor of the colony of Curacao made a contract in 1883 for regular service between the islands, there had existed private connections by Saban owned schooners.

In correspondence between the Windward Islands and the Governor there are many references of money being sent back and forth between the islands and Curacao and carried by Saba Captains. Just to mention a few: Capt. E. B. Hassell of the schooner ‘Mathila”, Capt. Engle Heyliger Simmons of the Swedish registered schooner ‘Sir Carl’; Capt. H.Johnson of the schooner ‘Isabel’ and Capt. P.J. Every of the British registered barkentine the ‘Nimble’. They were paid on a case by case basis. This took place before 1880.

After the ‘Christiansted’ a government owned schooner named “Gouverneur van Hurdt” took care of the mail service from October 1st, 1908 until it was lost in the night of 12th to 13th June 1910. This schooner which had been built prior to 1902 mostly served between the ABC islands.

Shortly thereafter a government owned steamship was taken into service. In a letter from the Minister of Colonies Mr. de Waal Malefyt, dated The Hague April 3rd 1913, he speculates about starting a steamship service to these islands to replace the “Princess Juliana”.

Curacao had steamship service to St.Thomas by a German Company the Hamburg America Line and was connected to Trinidad by the Royal West India Mail Service Line, forerunner of the K.N.S.M. (Royal Dutch Steamship Company.). The Minister wondered whether it would not be possible for the Royal West India Mail service Line to connect the Windward Islands via St. Thomas to Curacao and via Trinidad to Paramaribo, Surinam.

The Dutch Naval Commander in the Caribbean gave as his advice to His Excellency the Governor that the only reason why a boat service between Curacao and the Dutch Windwards was really necessary was for administrative purposes. As he correctly stated in his letter of 12th July 1913, if these islands did not belong to the colony Curacao, then no one would give themselves any kind of headaches over inter-island communications. 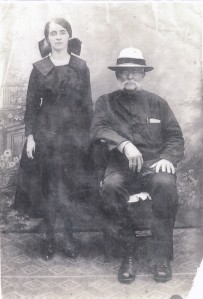 Capt. Samuel Augustus Simmons with Pansy one of his daughters. He made a record run of 48 hours under sail from Curacao to St. Maarten with the schooner the “Georgetown.” in the nineteen twenties.

In order to give a clearer picture of the trade between the islands let us look at the following;

At the same time imports to the Windward Islands from abroad were: to St.Maarten f.152.074.—to St.Eustatius f. 52.532.—and to Saba f. 78.498.–, while exports abroad were: from St.Eustatius f.60.374.—St.Maarten f. 43.313.—and Saba f. 5.276.—These figures stand to prove that the trade between the Windward and the Leeward Islands was insignificant when compared with trade from abroad. This hold true even more so today. 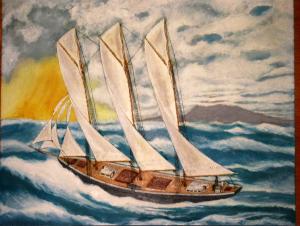 Passenger traffic was not much either. In 1912 departures from Curacao to St. Maarten were 69 (mostly colonial officials and members of the clergy )to St.Eustatius 4 and to Saba 11.

The government owned steamship the “Princess Juliana” had been built in Holland at a cost of f.160.000.—and it arrived in Curacao on 20th November 1910. However due to a faulty design and top-heavy superstructure, which for more accommodations had been recommended by Governor de Jong van Beek en Donk, the ship was not seaworthy. It was 443 gross tons and 229 net tons and had a length of 50, 30 meters, a width of 7,63 meters and a depth of 2,87 meters, fully loaded. There were four, 2-passenger cabins, 1 luxury cabin, a smoking salon, which could be used as reserve accommodations, and a large dining room in the first-class amidships. Also, one 4-passengers cabin, four 2-passengers cabins, and a dining room in the second-class section to the back of the ship. Besides, there were the necessary service-rooms and also facilities for deck-passengers. The ship had a motor capacity of 327 horsepower, and used 25kg of coal per mile.

Due to engine trouble which could not be taken care of at either St.Kitts or St. Thomas the ship had to make it’s first to the Windward Islands via Trinidad. Already on this trip the ship proved unsatisfactory for the crossing of the Caribbean in the path of the trade winds. Since the ship had been built for the coastal trade, it was sold to Surinam for f. 100.000.—where in 1921 it was still reported as doing duty there. After this steamer episode, the trade between the islands went back to schooner trade with Saban owned and operated schooners.

“The Marion Belle Wolfe” one of the many large schooners owned by Sabans. Here pictured in Kralendijk Bonaire picking up goat manure for Barbados.

The Administrator of Finance in a lengthy report to his Excellency the Governor dated 16th September 1913 suggested that instead of a steamship service between Curacao and the Windwards it would be better and cheaper to make a contract with the owner of the schooner ‘Estelle” (Capt. T.C. Vanterpool of Saba). He also owned the ‘Pretoria”. The suggestion was to let both schooners run a regular service to St.Thomas, and then the passengers could go from there with the Hamburg America Line on to Curacao.

In a petition to His Excellency the Governor, the merchants of Bonaire complained that the ‘Estelle’ only called there once a month and although larger than the ‘Gouverneur van den Brandhof” was more uncomfortable, and that they had enjoyed the steamship service provided by the ‘Christiansted’ and the ‘Princess Juliana’ even though they had found it regrettable that the latter proved not to have been built correctly and was unsatisfactory for use in Caribbean waters.

Also the Court of Policy on Bonaire in a separate petition informed the Governor of their preference for a steamship company.

According to a report from His Excellency the Governor dated November 5th, 1913, the ‘Estelle’ although a good sailor took from 7 to 8 days to travel to the Windward Islands, and that “first class passengers” actually meant sleeping in the dining hut and second class passengers had to sleep on deck, and that especially for the ladies in these “modern times” (1913 mind you), this type of transportation between the islands was not yet up to date.

Lighter boats would bring passengers and cargo from the schooners to the rocky shores of Saba until 1973.

Around 1914-1915 His Excellency the Governor started a lengthy correspondence with representatives of the “Ostasiatiske Kompagni” at Copenhagen regarding a service between the islands. The following is quoted from a letter to Mr. Berg at St. Thomas, representative of this company from H.E. the Governor dated 11 December 1915.

On the third of July last Mr. Mikelson representative of the “Ostasistische Kompagni” at Copenhagen, called on me, introduced by Mr. Edwin Senior, agent of the Hamburg-Amerika Line. He informed me, that his said company had o.a. the intention to start a steamship communications between Denmark and St.Thomas and, in connection therewith, to cause a smaller steamer to run between the different West Indian islands and, if possible, also Maracaibo. As he had learned that the Government of this colony wished to have a steamship communication between the different islands of the colony, he asked me whether the Government would be willing to grant a subsidy if the islands were included in the itinerary. 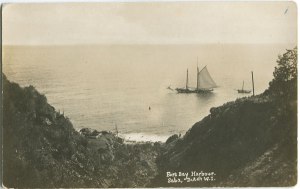 I answered him, that if no steamer was bought in Holland for the navigation between the islands of this colony, his proposal might probably be accepted. I then asked him to make his conditions known to H.E. the Minister of Colonies at The Hague, to which he replied, that he ought first to consult the Management of his company in Europe.

H.E. the Minister, whom I had made acquainted with the matter, requested me lately, to enter into negotiations with you.”

We are in receipt of your highly esteemed letter of 11th December 1915, and have noted the contents with great interest.

The East Asiatic Company, Copenhagen, for which we have the honour of being General Agents for the West Indies, have for many years maintained a regular service between Europe and St. Thomas with comparatively large passenger and cargo steamers, and lately also with Motor ships.

We are now placing before the East Asiatic Company your much honoured proposal, and shall take the liberty of reverting to the question in due course.

We beg, however to mention that, at the present time, it would be very difficult to secure suitable steamers for the service indicated, and owing to the scarcity of tonnage and high freights paid in the open market we would have to look for a big subsidy to keep up the regular service between the islands of your colony.

We beg to kindly state how large a subsidy you eventually could offer if we succeeded in providing suitable ships to do the service.”

The steamship service referred to earlier was quite costly. For the period October 1905/1906 the government paid the Hamburg Amerika Line fls.20.000.—for the services of the “S.S. Christiansted.”

The”S.S. Princess Juliana” had cost the government fls. 160.000.—Due to poor construction it proved unsatisfactory for use in the Caribbean Sea and was shipped to Surinam for the river trade. It served a total of 26 months, from November 20th, 1910 until the end of 1912, and the operating costs to the government were fls.60.000.—per year.

After having been accustomed to some years of steamship service with the “S.S.Christiansted” and the “S.S. Princess Juliana” it was back to schooner services for the islands after 1912.