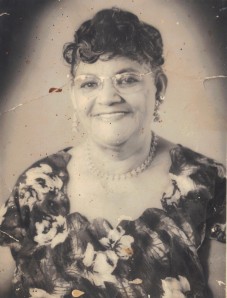 Mrs. Ada Edmead- Lopes had a guesthouse on St. Kitts.

As published on “Of Saba Descent”

Once when I was a member of parliament I received a call from Dr. Eric Kleinmoedig. At the time he was head of the department of foreign affairs for the Netherlands Antilles. At the time Mrs. Maria Liberia-Peters was our Prime minister. Dr. Kleinmoedig informed me that the Prime Minister had been invited to give a lecture on St. Kitts at the PAM party’s annual convention. He went on to say that Maria had told him that since I knew everybody’s business that perhaps I could prepare a speech for her as she knew very little about St. Kitts.

When she arrived back on Curacao she called to thank me. She having been born and grown up on Curacao had no idea of how important a role St. Kitts had played in the Eastern Caribbean and especially in the Dutch Windward Islands in the past. And what was astonishing to her was that most people in the St. Kitts audience were unaware of this as well. She told me that after her speech many people in the audience came up to thank her and bombarded her with questions about their country’s former important role. She said she told them that only recently when planning this trip, coupled with the speech I had written that she herself had become aware of this part of our interesting shared history in these islands.

The waters which separate us also bind us. This was especially so in colonial times before the advent of aviation. The island of St. Kitts had been the mother colony for both the British and the French in their first colonial adventure in the Caribbean then considered the private domain of the Spanish empire.

After one hundred years of fighting over the island the French finally left, but the names Basseterre, Dieppe Bay and so on are yet reminders of the French period when the two extremes of the island were owned by them. The troubles were so much between the British and the French that the English. Colonizer Sir Thomas Warner is quoted as saying that he “would rather have two devils for a neighbor than one Frenchman.”

St. Kitts has often been referred to as the “Mother Colony” of the former British West Indies. A little known fact to most people today is that St. Kitts up until the late nineteen fifties functioned as a mother to the Dutch Windward islands as well.

It is regrettable that the relationship which existed in colonial times between the islands suffered such a setback after St. Maarten started to rise and St. Kitts decline. Instead of moving closer together we have drifted apart. Recently though with the fiber optic cable and with a few strategic phone calls to the authorities on St. Kitts a start has been made to bind the ties between St. Kitts, St. Eustatius and Saba.

The Dutch ( and also the French) islands of the Eastern Caribbean  not only used St. Kitts as a transit point to their onward journeys to such destinations as Bermuda and the United States. Transportation in those days was provided by the Royal Mail Steam Packet Company from St. Kitts. For our people the town of Baseterre was the metropolis of the Eastern Caribbean. It was the place to also visit friends and spend vacations. Old timers on our islands of Saba and Statia still reminisce about such hotels as “Shorty’s Hotel”, “Montesaires Hotel”, “Miss Ada Edmeads Guesthouse”, “Barclays hotel” and so on.

St. Kitts was also the island with the general hospital. Cunningham Hospital started in 1848 functioned as a regional hospital and doctors such as Dr. Shaw first worked on the Dutch islands before moving on to St. Kitts. My friend the Governor General Dr. Cuthbert Sebastian more than once told me the story of a young man brought to his hospital from Saba in the late nineteen forties. I later found out that it was Gerald Hassell. Dr. Sebastian told me that he had a ruptured appendix and there was no hope for him, yet he wanted assurances from the doctor that he would live as he had a wife and two small children. What could the good doctor do under the circumstances but assure him with a white lie that all would be well and Gerald died shortly thereafter. Back in the nineteen twenties my mother had a good looking cousin Joseph Simmons with whom a nurse fell in love while he was hospitalized at Cunningham Hospital. He died but she remained single and kept in contact with our family until she died in the nineteen sixties. Even after the nuns started the St. Rose hospital on St. Maarten people from Saba and Statia still continued to use the medical facilities on St. Kitts. The dentists and eye specialists were the reason also given to visit St. Kitts. These medical specialists also visited the Dutch islands from time to time. One of those dentists fondly remembered, not so much for his dental abilities but for his foul tongue is Dr. Losada. Oh but Dr. Losada could speak a bad word old timers will tell you.

Captain Ernest A. Johnson in his Memoirs speaks for many former Dutch Windward Islanders when describing his first trip to St. Kitts in 1900:

“On the 2nd May, 2 am the weather was moderate and we were close to West of Brimstone Hill. Two tacks and a hitch, and the good sloop “Lillie” was safely anchored in Basseterre, St. Kitts. There my maiden passage ended. I was stopping at the Montesaires Hotel waiting for the steamship “Tiber” to arrive, for Bermuda was the second part of my voyage. On the 15th of May the “Tiber” arrived to sail that day. There was much social interchange between the people of St. Kitts and those of the Dutch and French islands in the Eastern Caribbean as well. Leading families from the islands intermarried.

In Mr. J.C. Waymouth’s book “Memories of St. Martin (N.P.)” he mentions St. Kitts on numerous occasions, giving an indication of the importance of St. Kitts to the people of St. Martin in those days. On a more personal note he writes:

The writer, during the interval from 8th June to July 18th, 1927 was absent from the island attending the wedding at St. Kitts , of his youngest daughter Anna to Mr. C.S. Dickson of that island.”

Mr. Waymouth, in his book, dealing with the year 1915 also had the following to say: “The year saw the following events (some of them not upon our soil but still affecting it) -. The establishment of the Royal Bank of Canada at St. Kitts; The disappearance by death at St. Kitts of Mr. R. Cable, publisher of the “Daily Express and Weekly Advertiser, and the appearance of the St. Kitts-Nevis “Daily bulletin” which is still published by Losada and Uddenberg, were of this nature.”

Several of the leading families on the Dutch islands also played an active role in the economy of St. Kitts as well. The largest sugar cane producing estate on St. Kitts, “Brothersons” at the turn of the last century was owned by Mr. J. G. C. Every of Statia/Saba background. His two sons were among the 14 Windward Islanders and French St. Martinets who were lost on the schooner the “Verdun” which left Nevis harbor in a hurricane on August 24th, 1924. Among those lost were the Mayor and Judge of French St. Martin, and Mr. Gaston Chance an elder brother of Senator Leo Chance.

In the labor riots which broke out at Buckley’s estate in 1935 among those killed was a Simmons from Saba a foreman on the estate. At that time there were a number of Saba and St. Barths families who had established themselves on St. Kitts. Coming to mind is Mr. Clifford Heyliger of Heyliger’s Jewelry store and across the street from him Mr. Eric Skerrit who owned the drugstore, both of whom were from Saba, and there were the Dinzey’s and so on. Capt. Ben Hassell of Saba and his brothers had extensive schooner trade relations with St. Kitts from Barbados. Capt. Ben is the grandfather of the Goddard family who own Goddard Enterprises and they still own businesses on St. Kitts. If you see Richard Goddard you see his grandfather Capt. Ben. Also John Gumbs who had a large trading company was married to not one, not two, but three Leverock sisters from Saba. Those Leverock sisters must surely have sweetened Mr. Gumbs cup of tea.

Capt. Edward Anslyn on the ferry between St. Kitts and Nevis.

Also Capt. Edward Anslyn was for many years the captain of the ferry between St. Kitts and Nevis. His son Capt. Arthur Anslyn known as “Brother” followed in his footsteps. We also have a number of people from St. Kitts and Nevis living here on Saba and married to Saba people. Space will not allow the full story of a Johnson relative who went to St. kitts and had dinner with the Khoury family. He came back puzzled as for desert they had served him something which according to him was jumping all over his plate and was still alive when he swallowed it. His brother brought light to the situation by informing him that what he had eaten was something new called JELLO.

It would be false and misleading to portray the relationship between the islands as always having been smooth. In World War I the Dutch government took a neutral position in the war for fear of being overrun by the Germans. The then colonial authorities at St. Kitts branded the people of the Dutch islands as followers of the German Kaiser and made trade difficult for a time. Schooner captains from Saba were accused of supplying German U-boats with food supplies. To add insult to injury these food supplies were purchased at St. Kitts at times.

In matters of trade, well into the nineteen sixties St. Kitts played a dominant role in the Eastern Caribbean. The Dutch government owned schooner the “Blue Peter” maintained a weekly scheduled service to St. Kitts and the motor vessel the “Antilia” made a monthly call. Our people continued to trade with St. Kitts to do banking transactions, to visit doctors and to just go for vacation. When I was Commissioner my assistant Dave Levenstone, who had roots in Monkey Hill , each year we would have the St. Kitts- Nevis defense force band  come to Saba and liven up the “Saba Day” celebrations and our people would love it. Every opportunity I get with Dutch officials I stress the need to open up a dialogue with the government of St. Kitts- Nevis to better our relations. On a personal level the former leaders of St. Maarten, Claude Wathey and Clem Labega enjoyed excellent relations with Chief Minister Llewelyn Bradshaw, and Claude chose as his bride Miss Eva W. Rack of St. Kitts, related to the Uddenbergs.

An attempt must be made in this part of the Caribbean archipelago to bring the islands closer. The islands, independent, British, Dutch  and French background are all in view of one another and should be tuned in to the heartbeat of each others people and the history which unites us. As an independent state St. Kitts -Nevis can start the ball rolling by appointing Honorary Consuls in the other islands, and since we are united by at least a fiber optics cable now, perhaps the television station on St. Kitts can transmit programs to Statia and Saba so that we can follow more closely developments there as starters.

Among sources consulted is “Historic Basseterre” an excellent history of not only Basseterre but St. Kitts in general by Sir Probyn Inniss.