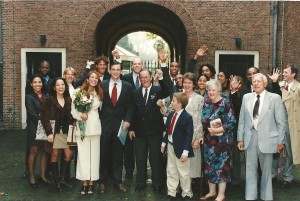 We just received the good news that my son Theodore Reuben Johnson has been appointed by the Government of Aruba as Substitute Notary as of tomorrow. This is just part of the legal procedure for him to become full fledged Notary soon. In the meantime he can start his own office and function already as Notary. That stage is in progress already and he can start taking clients anytime now. He is off to a fresh start in life being his own boss.

It has not been made easy for him but the joy of his being appointed overides all stress and inconveniences and obstructions in his path. He will be the first Notary Johnson on Aruba and his English speaking clients just seeing the name will want to take a chance with him and let him do their business for them.

He was the first born Saban who grew up on Saba and who graduated in the prestigeous Law school of Leiden University with two Masters Degrees in 1998. He was only 23 years old and started working the following month already. He has a Masters in Civil Law and a Masters in Notarial Law which in the Napoleonic Code is a special study. His appointment is for life with mandatory resignation at the age of sixty. That will probably change to 65 in future.

After working in The Netherlands for awhile and taking extra courses he then moved to St.Maarten and worked there for awhile and then moved to Aruba and has worked there since. Teddy is an all rounder. He is about to publish his book on research on the sayings of Saba, “Oh me Allyou” and all of that and in interviews with the old timers he has garnered quite a lot of information for the book. Teddy attends all funerals, baptisms, births, weddings and anything to do with Saba on Aruba. The Saba people there all know him and have nothing but praise for the way he moves around with people. He is also wellknown in the business community and is a Member in high standing of the Kiwanis Club. He has done work for many of the largest companies in Aruba while working for other Notaries. Now he will have to build up his own clientele, but I am certain that he will make it. I am sure that his many friends in the Windward Islands will be glad to hear this good news and that is the reason why I am posting this.

These photo’s are from the day of his graduation before the four examiners with friends and family looking on. One of the examiners told him “Just because your friends and family are here do not think we are going to hand out two diploma’s to you just like that.” The lady also wondered why he as a Scotsman would want to study Dutch law. He admitted that he was a Scotsman via a long four hundred year sojourn on the small Dutch Caribbean island of Saba.

And so today his family and friends can be proud that he will now begin his own career on Aruba and we praise God. As I said of all my children as quoted from the book of Samuel:” I prayed for this child and the Lord has granted me my petition.” AMEN.