Visiting Guy on his birthday, left Peter, Wilda and grandson Raleigh, Guy and Will Johnson

Born as Samuel Guy Johnson, in the former Saba tradition, he went through life as Guy.

He was born on October 20th, 1936 at a place on Saba called “Behind-The Ridge”. No complicated names back then: “Behind-the-Ridge-”, “Above-the-Bush”, “Flat Point” and so on so that you had no excuse for not knowing where you were going to or had been. Our parents were Alma Blanche Simmons [born July 24th, 1908] and Daniel Thomas Johnson [born January 9th, 1907].

Because of circumstances at the time life was hard and as children each child had to do their share to keep the Household in food. When our mother was pregnant with Guy, while feeding grass to a large bull in the pen, he rushed her and threw her over the wall of the pen into the large rocks below. She and Guy then in the womb both survived.

As a boy growing up the island suffered much by the deprivations caused by World War two. 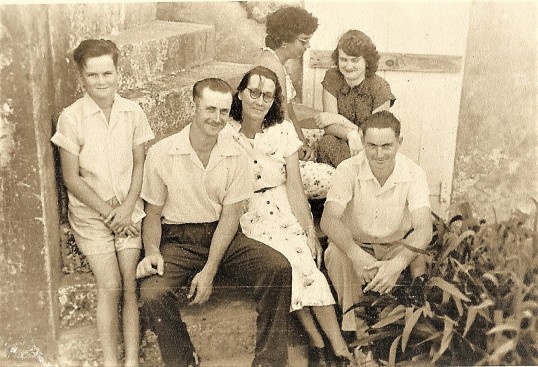 The house we lived in above the Sulfur Mine had been built with monies earned when our father worked in Bermuda in the dry docks there which took care of the British Naval fleet.

Our mother never liked Behind-The- Ridge. The house was built close to the edge of the cliffs above the Great Hole. Guy inherited not only his height from our mother who was [six feet and one inch tall] while he was [six feet and four inches tall], he also inherited bad memories of the place. When he had a dream, which involved Behind-The –Ridge he would say that someone in the family was about to die or that some other disaster was about to take place. 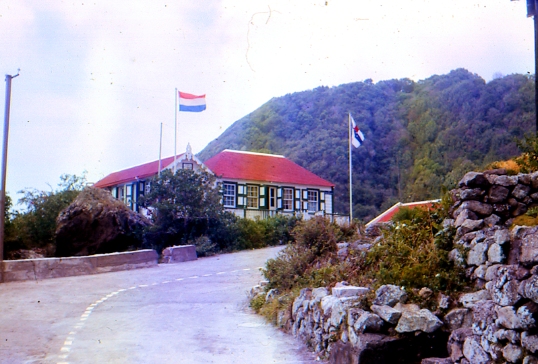 This is the house in English Quarter when it served as the residence of the Island Administrator R.O. van Delden who was then a widower, He had been married to our sister Sadie. The house was taken down at Behind-the-Ridge and brought over on head by my brothers Guy and Eric and rebuilt where it still stands today,

In 1943 the family left the home at Behind-the-Ridge and moved to the Windward Side where we had to rent a house. Something unheard of in those days and the rent which was twelve guilders a month was always a great source of worry where was the money to come from to pay the rent.

In 1955 Guy and Eric, helped by friends, took the house apart at Behind-The –Ridge. They brought it over on their heads, shingles and all, and rebuilt it in English Quarter. It even served as the home of the Island Governor, in the sixties for a while. The house still stands there proudly today having weathered all the hurricanes.

Left to right. Freddie, Eric, Guy and Will Johnson

In the nineteen fifties when Guy finished elementary school and was working for the Department of Works [Public Works], he was sent with some others from Saba to the city of Mayaguez in Puerto Rico to study the basics of agriculture.

On January 2nd, 1955 hurricane Alice dropped some 20 inches of rain on our island in less than twenty-four hours. The flood it created destroyed the road leading to the Fort Bay. In a recent interview which was posted on Face Book he tells of the hardship he faced as a nineteen-year-old, bringing up bags of cement and sand to restore the road. There was not one piece of heavy equipment on the island at the time. His wages were a bit more than the daily wages paid to our grandfather James Horton Simmons which was sixty-five cents a day when he was working in 1939 on the construction of the road.

Guy continued working for the Public Works on the building of the road until he got a much sought-after position in the Post Office. He also worked in the Treasure and later in life became the head of both departments and remained in the Treasury until his retirement.

I recall a tribute which then Lt. Governor Sydney Sorton paid to Guy at a reception at Scout’s Place. The Lt. Governor told those present that he had always looked up to Guy since he was a child. He still looked up to Guy. Not only because he was so tall, but especially because of the confidence his parents had in Guy. Mr. Sorton went on to tell the story. Back in those days the Post office was everything. Not only for incoming and outgoing mail, but it also served as a bank and so on. When his parents wanted him as a child to carry a parcel or a letter to mail, it was a worrisome task for a child. But both parents reassured him when he got to the Post Office to just ask for “Mr. Guy”, and he would take care of the rest. In my mind’s eye I can still see Mr. Sorton as a little boy looking up to that tall man behind the counter and trusting him with his parents trust that Mr. Guy would do the right thing. In talking with Commissioner Roland Wilson before I could even tell the full story, right away he said: “Yeah, yeah, I always remember that speech which Mr. Sorton made for Guy.”.

Guy in a forever good mood and an eternal smile. He was born at Behind the Ridge on October 20th, 1936

In 1960 Guy got married to Angela Johnson and together they had three sons. Greg who lives in Florida, Eddy who is a harbour pilot on St. Maarten, and our Island Governor Jonathan.

Guy’s other marriage was to the Saba Lions Club. As a charter member in 1977 he served for the rest of his life in the Club in various functions.

For many years the Lions Club took care of the Saba Summer festival also known as Carnival. He was very active with all the activities in order to see to it that the yearly event went off without a hitch.

He was also very active in the Roman Catholic church as a Member of the Parish Council and helping out wherever he could. Even in his last weeks he would be talking about church matters while in hospital. 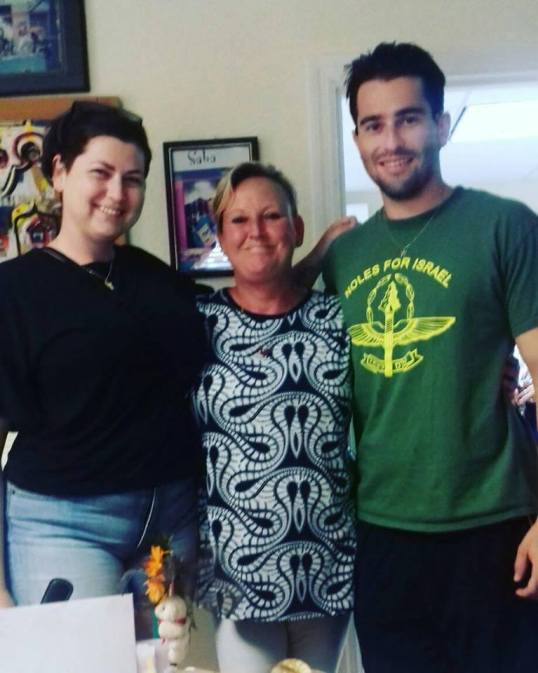 In the nineteen seventies the Christian Council of Churches [C.C.C.] created a fund to help poor people get easy loans to build cisterns with. A Minister at the time said that “A person in the islands without a cistern is a poor person.” The Saba Local Fund Foundation was established and was given a loan of twenty thousand Antillean guilders. This was a revolving fund and low interest loans were given for the purpose of building cisterns, adding on kitchens and so on. During the existence of the Fund Guy served as the Chairman and was assisted by Secretaries like Mr. Leroy Peterson, then Mrs. Wilma Every-Woods and Mrs. Sonia Richardson-Sorton.  When loans became easier to get from the commercial banks the Fund paid back the C.C.C.  the initial loan and the money made from interest on those loans were distributed to the churches on Saba. Guy traveled to various Caribbean Islands for meetings in connection with this Fund. Saba was the only island where all the loans were paid back and where full account could be given on the use of the monies loaned by the C.C.C.

Guy also like to fish and often told stories about how whales when surfacing near the small rowboats fishing on the ‘Saba Bank”, had nearly overturned the boat. From a boy Guy had to farm and keep cattle. What was done out of necessity grew into a lifelong love of working the soil of which our ancestors have been a part for centuries.

He will be laid to rest in the cemetery among his ancestors. One of his ancestors Commander Richard Johnson of 1828 is buried within sight of the cemetery. All four of Guy’s grandparents are buried here as well and he is being laid to rest in the grave of his maternal grandmother Agnes Simmons born Johnson and not too far from the last resting place of his brother Freddie.

Nothing needs to be exaggerated about his personality and his seemingly ever good mood. Now that Face Book is the most used means of communication on Saba, the tributes which have been made to him from all the Island Families tell it all.

Guy visiting our home at The Level and going through one of my many family photo albums. He was a frequent visitor to my home.

Guy traveled the Caribbean extensively as a member of the Lions Club. He was known everywhere as “Lion Sam.”

He also went on family vacations and also for health reasons to The Netherlands and Colombia.

Throughout the hardships he experienced in life he always remained calm and collective and seemingly always in a good mood. His life goes to prove that even in a small place, on an island, much can be achieved when focusing on the positive things in life. He has been a real role model not only for his children and grandchildren but for Saba on the whole. In a sermon here in this church a couple of weeks ago, a visiting priest from Jamaica Father Bernard, sad that many people’s biggest concern is “How will I be remembered?” It is perhaps that worry which drives people of accomplishment to do ever more up to the very last.

Should Guy have had such a worry then he need not have had to. For sure he will be remembered. Not only for being a tall man, but especially for being a gentle and kind man with a forever smile even up to the last when he was going through the end days and the suffering it brings with it.

A special word of thanks to all of those who heaped praise on my brother, to all those who turned out to accompany him to his last resting place and to all of those in the health care system here on Saba and on St. Maarten who helped to take care of him in his last days.

A certain Bishop Brent reminds us in a sermon what dying is all about.

“A ship sails and I stand watching till she fades on the horizon and someone at my side says. She is gone.

Gone where? Gone from my sight, that is all. She is just as large now as when I last saw her.

‘Her diminished size and total loss from my sight is in me, not in her.

And just at the moment when someone at my side says she is gone, there are others who are watching her coming over the horizon, and other voices take up a glad shout. There she comes.

That is what dying is. A horizon and just the limit of our sight! Lift us up, oh Lord, that we may see further.!

Thanks to all, and May he rest in Peace.