Nurse Angele here with her brother Gaston Cagan who used to be a taxi driver and before that worked for the oil refinery on Aruba.

Nurse Angele Cagan was an icon in the Philipsburg in which I knew in the fifties and sixties. She was a native of the village of Grand Case. Where I lived at Captain Hodge’s Guesthouse both Captain Hodge and his wife Mrs. Bertha Hodge-Lawrence were also natives of that village.

The hospital was just a stone’s throw away from the guesthouse. What little spare time Nurse Angele got she would walk up to the Guesthouse in her white uniform to visit with the Hodge’s. She took a liking to me and started calling me ‘Kennedy’. This came about when we were following the election results on radio and when President Kennedy beat Nixon. Everyone but me that night was for Nixon for whatever reason. But I stuck it out and Nurse Angele would buckle up with the laugh when comments were made. She would look in my direction and I had a feeling afterwards that she secretly supported Kennedy but did not want to get in a clash with Capt. Hodge and Miss Bertha.

When Kennedy won she only called me by that name. I remember [don’t all of us] the day he died. I was walking up the Front Street from the office. When I passed the St. Rose Hospital where she worked she was out on the gallery facing the street and called out to me;’ Lord Kennedy, Kennedy dead.’ So I had to go in and sit and talk about the day’s events with her.

Mrs. Olga Buncamper-Hassell signing the registry, with Jewel Levendag-Wathey watching on as well as Dr. Carl Levendag behind her and Mr. Walter G. Buncamper standing next to Mrs. Lionel Conner-Kruythoff.

I have an article from Saturday October 5th, 1963 from the Windward Island’s Opinion which for this article I would like to share in its entirety. I happen to have in my collection photos of the event from the album of Jewel Levendag-Wathey and I can match the article with the photos. Nurse Angele was important to a lot of people as she delivered a lot of babies in her day as a Nurse.

The article is as follows: TWENTY-FIVE YEARS OF NURSING.

On Sunday September 29th, Miss Angele Cagan, celebrated her Silver Jubilee, 25 years as a nurse in the St. Rose Hospital at Philipsburg.

The occasion was marked by a solemn High Mass at 8 a.m. in the Roman Catholic Church at Philipsburg. The church was crowded with many of her friends, relatives and former patients (some of them had come from as far as Marigot and even Grand Case). The Rev. Father Boradori, Parish Priest; in his remarks about Nurse Angele after the Gospel, pointed out that, in the 25 years that she had been a nurse in the St. Rose Hospital, she had always been a very dedicated nurse and he was sure that she did not work for the money, but instead for the love of bringing relief and comfort to suffering humanity. He compared her dedicated service to the Inn-keeper; in a parable of Jesus (A certain traveler had found a sick man by the wayside, given him assistance and taken him to an Inn. In the morning when the traveler was leaving, the sick man had not fully recovered, so the traveler paid the Inn-Keeper for the night and asked that the sick man be taken care of until he (the traveler) returned, promising that he would pay all the costs on his return. The Inn-Keeper did not ask the traveler to pay in advance – but took care of the sick man with the hope that someday the traveler would return. 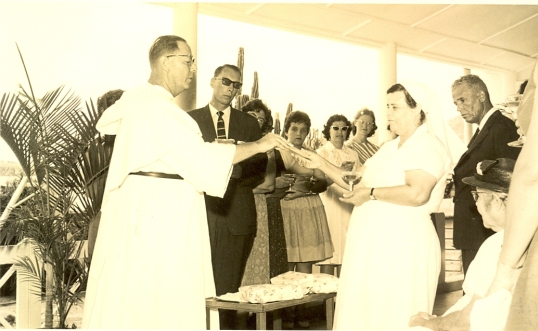 “Our dear Nurse Angele,” he said: “Has been taking care of the sick entrusted to her tender care, by Our Lord Jesus Christ, and one day, I am sure, that at the end of her journey, He will return and repay her for all she has done.’

A reception was given in her honour at the St. Rose Hospital, from 11 a.m. to 12 noon, and among the many persons present were: Lt. Governor, J.J. Beaujon, Dr. Levendag, Ex. Lt. Governor and Mrs. W. Buncamper, Mrs. L.C. Fleming, Mr. Cagan (her brother), Mr. Th.A. Illidge, Mr. and Mrs. R. Carty and Mr. and Mrs. L.B. Scott. Most noteworthy among those present were; Mr. Anthony Buncamper (Nurse Angele ‘brought’ his mother to be with him) and his little son (Nurse Angele ‘brought’ his wife to bed with his son)-

Speeches congratulating Nurse Angele were made by the Revered Father Boradori, L.B.Scott, Th.A. Illidge, J.H. Lake, R. Carty and Dr. Levendag – And all the speakers praised her for her unselfish and dedicated service to the sick of this community during the past 25 years – She was also the recipient of many useful and valuable gifts.

The Windward Islands Opinion joins the rest of the community in congratulating our beloved Nurse Angele and prays that the good Lord, may bless and keep her for many more years.

Nurse Angele assisted in the delivery of many children on St. Maarten.

Before she retired she built a house on the Back Street. She would go there during the day but would spend most of her time living with Miss Bertha and the Captain over in Sucker Garden. They had sold the Guest House and built a home over there. Catherine Hodge would drop her off at her home on Back Street in the morning and pick her back up at 5 pm and bring her to sleep at the home of the Hodge family. Catherine told me that being a young woman then that Nurse Angele would sometimes have to wait on her and would let Catherine have it when she was late in picking her up. Later on when they all got older she spent her last years in the St. Martin’s Home.

Elsje from the St. Maarten Heritage Foundation said that she would see Nurse Angele coming down the Secretarissteeg (Secretary Alley) to go to work at the St. Rose Hospital. Elsje said she would visit her when she was in the Home. She was in a room that used to be part of the hospital where she had worked most of her life. ‘I always found it a little sad that she worked there and died there. She died on October 17th, 2003 and was buried in the Roman Catholic cemetery. She had no children but lots of nieces and nephews.’

Many of our old timers were true St. Martin islanders and worked where they could. I know of a number of people from the village of Grand Case who found work on the Dutch side and remained working and living there for the rest of their lives. When especially the ESSO refinery called the Lago was recruiting employees who could speak English any number of people from the French side and Anguilla found a way to register via the Dutch side and went on to Aruba. Some of them stayed there and have descendants there still.

Not only Nurse Angele has gone and left us but the hospital as well and the memories of  the buildings and the people who worked in them as well.In my own way I am trying to make a contribution to the past when we lived carefree lives far removed from the wealth of nations which were to consume us as time went on.

May Nurse Angele and her friends rest in peace and not be forgotten.