The Colquhoun Family On Saba

The Colquhoun Family on Saba

If there is one family on Saba who know and who are proud of their family history it is the Colquhoun (pronounced Cohone or Cahone) family.

I recently visited the Inveraray Castle in Scotland headquarters of the Campbell clan who are distributed worldwide. Mr. Walter Campbell used to tell me that once he had visited the Duke at the Castle as well. It would have been the father of the present Duke. He would have been Ian, 12th Duke of Argyll (1937-2001) whose wife (still alive) was Iona Colquhoun of Luss. Little did Walter know at the time that he would settle on Saba later on and marry Mildred who is one of the Saban descendants of the Colquhoun’s of Scotland.

In the bus on the way to Inveraray Castle the Fairytale Highland Home of the Duke and Duchess of Argyll the lady guide mentioned that the present Duke’s mother was a Cohone. That is the way she pronounced it. As soon as the bus came to a stop I spoke to her and I told her of the Cohone’s of Saba. She thought that the Duke would be there at the Castle but we were informed that he was out of town on official duties. I did buy a signed copy of the book on the history of Inveraray Castle and Gardens signed by the Duke himself.

Here on Saba we have people like Senator Ray Hassell, Commissioner Bruce Zagers and others who are descended from the Colquhoun’s. The late Norman Hassell of ‘Under-The-Hill’ in Windward Side, who did much research on his Saba family history was proud of his Cohone ancestry. ‘Mas Cohone Hill’ is a living reminder of this history. In slavery times the Master was referred to as Mas and this was also carried over to those who were not slaves.

One of the most precious books which I have in my sizeable library is the one “The Saban Way “by Greg Johnson. In that book he lovingly portrays his Saba parents and they growing up here and then moving to Aruba where his father Chester worked for the LAGO, and where Chester met his wife Dena also from Saba and were married there in 1948.

I especially enjoy the interviews which he had with his father when he was a boy working in the mountain with his father Cohone and being distracted by large pods of whales passing by the island.

Every family should be privileged to have such a detailed history of their family and their roots and the close knit relation they had and the shared memories of growing up on Aruba and later in Texas. A wonderful book and writing about it makes me want to read it one more time.

I know that Greg will not mind me quoting extensively from his book in order to give a better picture of how one of the Colquhoun family ended up on Saba.

Iona Colquhoun on the left mother of the Duke pictured here with his wife and first born.

“Barbados was also a destination for many Scots banished to the West Indies. In David Dobson’s ‘Scottish Emigration to Colonial America 1607-1785), on page 70 he states; “The single most important source that could be used to identify the early Scottish residents of Barbados would probably be the Parish Registers. Taking 1678-79 as a sample year, a number of Scottish surnames were found in the surviving registers. The St. James [parish] registers contain Cuthbert, Seaton, Affleck, Murray, Nell, Linkletter, Colquhoun and Spence.” [Public Records Office, London 13.24.172 -182]. 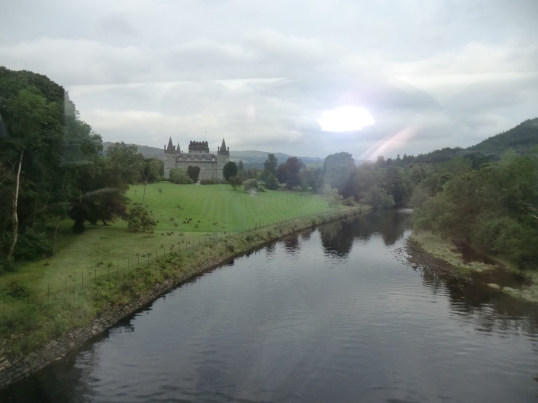 Inveraray Castle taken from the bus as we made our approach.

Barbados became the springboard for colonization of other West Indian Island colonies as well as those on the American mainland, according to Richard S. Dunn’s ‘Sugar and Slaves: The Rise of the Planter Class in the West Indies, 1624 -1713. On page 165, Dunn gives an overview of what was happening on Barbados in those early years; “By the middle years of Charles II’s reign, there were 400 households in the capitol, Bridgetown, 175 big planters, 190 middling, and 1000 small ones, 1300 additional freemen, 2300 indentured servants and 40,000 slaves.”

“According to records I have located thus far, the first generation Cohone Johnson of Saba was born in 1806 and was listed in an old record on baptisms as Colquhoun (pronounced Cahoon) Johnstone, two names that have historical origins in Scotland. The name Colquhoun was probably changed by Dutch Government officials in translation from spoken word to documents, as Cohone, a phonetic derivative. This Cohone or Colquhoun was my great-great-grandfather. (* Note to Greg. I asked the tour guide on the bus to pronounce it for me more than once and she came up with Cohone each time).

Will Johnson of Saba was also very helpful in my research. He is considered to be the greatest source of historical information pertaining to Saba, Sabans and the West Indies. I spoke to him about my quest, and he shared with me his theory of how Cohone Johnson, or “Colquhoun Johnstone,” arrived on Saba.

“St. Eustatius was at one time known as the Golden Rock and a lot of Saba families came from there. After Captain Rodney sacked Statia in 1781 many of the people gradually left. That event in history was Britain’s revenge on Statia. You see they were supplying the rebels in the colonies with guns and ammunition – not to mention being the first foreign land to salute the American flag, a gesture that took place at Fort O on November 16, 1776, when the brig Andrew Doria visited the island. But during the boom years [mid to late 1700s] Saba and Statia functioned like one community. People were going back and forth on a daily basis by schooner, sloop, what have you. A lot of Saba people had their businesses there …many of the present day prominent families including yours. Your grandmother, Orie Hassell, who later married the policeman Eert Sloterdijk, her mother was a Holm and her grandmother was a Wilmans, all of Statia.

In 1792, a man named Colquhoun Johnstone witnessed a baptism on Saba. Then on December 28, 1838, Colquhoun Johnstone’s name appears on a Saba baptism record for his daughter, Rebecca, aged 10 months. I believe Johnstone was the correct spelling. An ancestor from the maternal side, a mother for instance, might have belonged to the Colquhoun clan and, to preserve the name, gave it as a first name, a Christian name. It was a tradition here on Saba, especially among the more prominent families. They would have surnames as first names. During this era, Dutch officials translated surnames to suit their purposes, thus the gradual transition on birth, baptism, and death certificates of Colquhoun to Cohone and Johnstone to Johnson. I haven’t been able to confirm all these connections [because there are no records]. 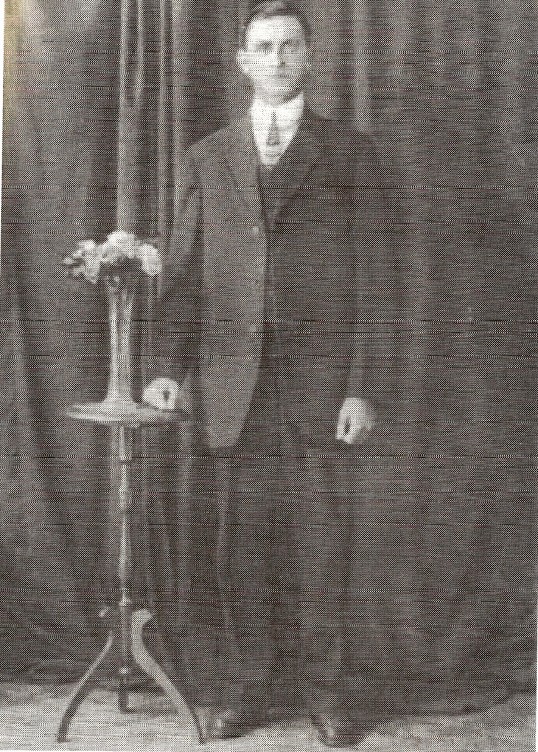 Cohone “Jack” Johnson III in New York city in 1912 at the age of 27. “My great-grandfather, my grandfather and my father, they were all Cohones (a.ka. Colquhouns), born and raised on Saba. Author Greg Johnson.

If you notice the accent on Saba, it has a bit of the Barbados accent because a lot of our ancestors were originally from Barbados. They were always looking for a new place where nobody had established roots. Going back and looking for your ancestors from Saba you have to keep those other islands in mind. You can’t make the jump from here to Scotland and England. The only exception would be Cohone Johnson. As a boy I heard that Cohone Johnson had a Statia connection.’

This interview with me was done sixteen years ago. Greg Johnson’s book was published in 2001. He goes on to say under Author’s Note: ‘Thus far, I have found official Dutch government – issued death certificates that state Richard Johnson (1759-1831) was the Johnson family patriarch and the father of Cohone Johnson I (1806-1882) and grandfather of Cohone Johnson II (1843 -1912) and great grandfather of Cohone ‘Jack’ Johnson (1885-1950), who is my grandfather. After my Uncle Jacob Cohone Johnson of Bermuda, I am the fifth Cohone Johnson, and part of the tradition. I am still searching for old records that would take me further back in time.” So far quoting Greg Johnson. He has more information in his book but I agree with him that the Colquhouns of Saba originate near the shores of Loch Lomond in Scotland.

Here standing in front of the Castle on the way in to visit.

I visited Inveraray Castle on Wednesday September 14th 2016. Very interesting. I left a note in the visitor’s book that Richard Colquhoun was paying his respects. I am not descended from the Cohone family. I am related to Greg for example through his grandmother Maggie who was a sister of my grandmother Agnes, but I am no direct descendant. On St. Maarten airport I met Mark Zagers and was telling something about my trip. Mark immediately announced with pride:’ I am a Cohone you know.’ They are tall people and strongly built those Cohone’s of Saba for the most part. Rupert Hassell and his sons were/are big men.

I also learned much about the Campbell clan at the castle. As head of the Clan Campbell, the Duke of Argyll is known as ‘ MacCailein Mor, meaning ‘Son of the Great Colin’. Knighted in 1280, Colin was the first of the Campbell’s and held lands around Loch Awe. Later, the family were supporters of King Robert the Bruce and fought alongside him during his historic victory over Edward II at the Battle of Bannockburn. Today there are thousands of loyal clan members all over the world. Many travel vast distances for reunions and celebrations, whether it’s a World Reunion at Dunedin in New Zealand or a Clan gathering at Inveraray Castle.

I must say that I enjoyed my visit to the Highlands. What I noticed with pleasure is that many of the hills which were denuded of their forests in order to raise sheep have been planted with trees in the past half century or so. 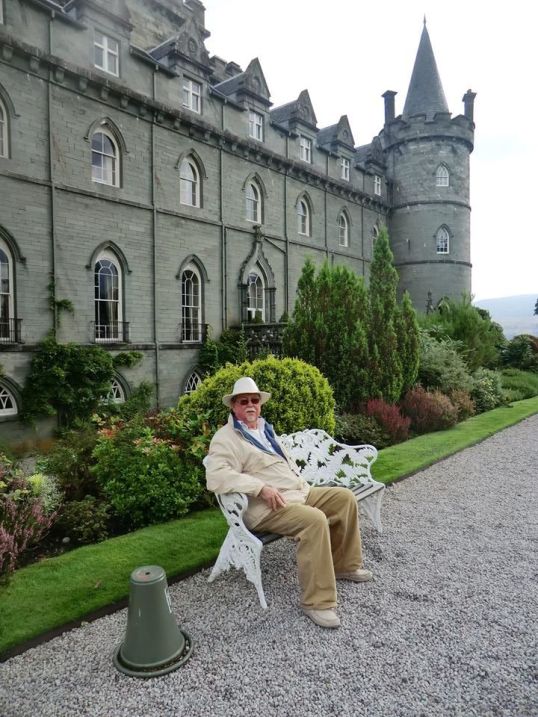 As I sat on a bench in the beautiful gardens of the Castle I thought that I might propose to the present Duke that he could spend a couple of months every winter at my home on Saba and I could look after the castle. He could pal around with his family members like Ray Hassell, Mark Zagers and others, while I while away the wintry days reading and writing and pretending that I am back among those warriors fighting along with King Robert the Bruce for the independence of Scotland. I cannot mention his name without thinking of my friend Ralph Berkel of St. Eustatius. When we were in the Island Council of the Windward Islands together he would often quote in meetings of the Island Council the story of King Robert the Bruce. He had lost six battles against the English. In the cave he saw a spider trying to make his web and six times he failed to reach a point he was trying to get to. The seventh time he succeeded. This was a divine message to King Robert who then went out, rallied his men and defeated Edward II at the Battle of Bannockburn. As I write this I hear the sad tone of the bagpipes calling on me to put on the battle dress of the MacEwen clan or the Johnstone’s of the borderlands and follow the call to battle once again.