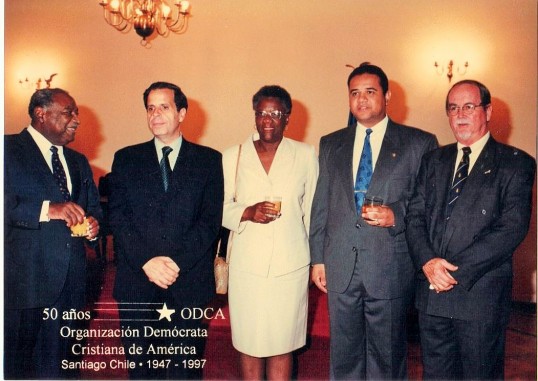 Left to right. Haiitian President  Leslie Manigat from Feb.1988 – June 1988. His wife Mirlande Hippolite also ran in 2010 for President. I traveled with both of them to many countries. The last time after his death in 2003, I was with Mirlande in El Salvador in 2010. She was by far the smarter of the two. The second in line was the Chilean Head of the ODCA, then Prime Minister Maria Liberia-Peters, then Nelson Els and then your humble servant.

This is part of the group who formed the new government while the PNP was resting on its laurels and unaware of what was going on.

Two days later on Curacao Chance proved to me that he could deliver the eight from Curacao at a meeting between parties in the Plaza Hotel. All of this took place without the press even being aware of what was going on. On December 5th, Maria who was then Prime Minister came to help us celebrate Saba Day accompanied by her beloved husband the late Niels Liberia. While the ceremonies were going on we had already negotiated a coalition and signed the agreement at Captains Quarters Hotel with Maria sitting two tables away. The next morning Maria invited me to have breakfast and informed me that someone from her party would be in contact with me in a few days about forming a coalition. I felt obliged to tell her the truth. In retrospect I can understand how upset she was. She was not to blame. I am certain that within her party someone should have been doing what Chance had done. The political culture on Curacao put the National Party to rest on its laurels after having been declared the great winner. As a student of warfare and a disciple of Machiavelli I realize that you are most vulnerable after a great victory. Our political relations were off to a rocky start. I knew all about Maria’s political history to that point. I knew her personally as well.

Here in the Alameda palace in Santiago the Chile with the President Left to right Prime Minister Maria Liberia-Peters, President of Chile Eduardo Frei-Ruiz-Tagle (1994-1998), his father Eduardo Frei -Montalva was President from 1964 – 1970, then next in line your humble servant, and after that Nelson Els of Bonaire..On my way to this meeting at a restaurant at Miami airport I met a young lady from Chile who told me when you visit my country say hello to the President.Ha.Ha. When I came back and went to the restaurant she was in the kitchen but came out to see me. When I showed her this picture she nearly fainted and was full of apologies. I told her not to worry I was no big shot but it was not enough to convince her. As I turned off I could hear her colleagues asking her as to how she had met that big shot. Ces’t la Vie!!