Daniel Johnson as a young man.

In my family there are any number of men with the name of Daniel besides my father and grandfather. It is claimed that our common ancestor was the pirate Daniel Johnson also known as “Johnson the Terror” an honour bestowed on him by the Spanish who were his main target back in the day.

This Daniel who I wrote about many years ago in the Saba Herald (Vol.18 December 24th, 1985 issue 209) was the son of my great uncle Henry Johnson a brother of my grandfather Daniel Johnson. You catch my drift with explaining about all these Daniels?

Back when there were no politics going on I would use the Saba Herald in its rest period from local politics to highlight the lives of a number of Saba people. In retrospect I am happy that I did that. Over the years I have done so many eulogies for people that I could go back and if I had done an interview with them I could use that interview for the eulogy. Afterwards many of the family members of the deceased would come up to me and tell me: ‘I never knew that. I never knew that my grandfather had even left Saba much less to have travelled to all of those places you mentioned etc.’

Now that I have my own blog ‘The Saba Islander’ and my column ‘Under the Sea Grape Tree’ a lot of which I wrote in the past still comes in handy to enlighten a new generation as to who their ancestors were and what they did with their lives back in those trying times.

Sanny Goud a granddaughter of this Daniel has been sending me photographs of members of her family and in my data base I also have some. I want to surprise her with this article about her grandfather Daniel. 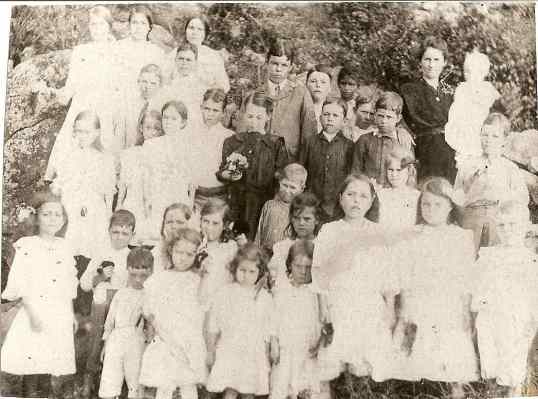 A group of schoolchildren of Palmetto Point, Daniel Johnson is in the picture as well as Charles Simmons his brother the little brown boy in back, and the lady holding the baby was a widow and married John Skerritt the teacher who also took this photo.

Palmetto Point and Middle Island were the names given to the two villages established above the Well’s Bay when in 1629 a Spanish fleet captured St. Kitts from the French and the English and chased out as many people as possible some of whom sought refuge elsewhere. In all the official records up until the early part of the past century the village of Palmetto Point was known as such. Oral history has it that it was also called Mary’s Point in the early nineteen hundreds because a woman named Mary had a large number of children and people started calling it ‘Mary’s Point’. So be it but as a historian I am obliged to call a spade a spade so that our people can survive amidst a flood of false history being poured down on them.

These two villages were named after two with similar names which they had left behind on St. Kitts.

The article in the Saba Herald reads as follows:’ in continuing a series of articles on the old folks this month we would like to tell the story of Daniel Johnson who lives on Hell’s Gate. He was born in the village of Palmetto Point (also known as Mary’s Point) on December 1st 1903. He is still very active at his age, and still goes fishing down through the cliffs to “Great Hole” and even out to the ‘Saba Bank’ if you asked him to. His father Henry Thomas Johnson was born at behind-the Ridge (son of George Rodney Johnson and Sarah Elizabeth Vlaun). He moved to Mary’s Point and married Catherine Neesha Bail of Middle Island. He shared up the load of having many children with her sister. This seems to have occurred not only in his case but on St. Martin I knew a number of cases where two sisters bore children for the same father. And my great uncle also managed to produce a little brown berry whose picture you will see in the post with this article of the schoolchildren of Mary’s Point in which Daniel is also present.

Daniel ‘Pat’ Johnson’s wife Susan on the right with her hand on the shoulder of her niece Rose Johnson.

Daniel grew up in Mary’s Point and at the age of eleven he was sent to live in St. Eustatius with the Roman Catholic priest Father Hauptmann for seventeen months. In 1914 there was a big epidemic on the islands and especially on St. Eustatius. Pat’s duties included not only ringing the bell and taking care of the grounds of the church and presbytery but also being an altar boy. He became scared of all these funerals and more and more people dying so he decided to run away and head back for home. He stowed away on the Saban schooner “The Estelle”. Captain Tommy discovered him in St. Maarten but brought him home to Saba anyway.

The schooner the ‘Estelle’ of Capt. Tommy Vanterpool on which Daniel made his escape back to Saba.

Daniel remained home on Saba until he was nineteen (19) years of age and then he took off for Bermuda. In those days most of the young men especially from Hell’s Gate and Mary’s Point would go to Bermuda to find work and many Sabans remained there. He went with Capt. Ulric Dowling on the schooner the ‘Thelma’ to St. Kitts and then on to Bermuda with the Royal Mail Line. Before that he remembers going once with the ‘Thelma’ to fish on ‘Aves’ or ‘Bird Island’ with Feredoom Hassell, George Johnson, George Hassell, Winnie Hassell and his father Henry Johnson. They went there to catch and corn fish, turtles and also birds. 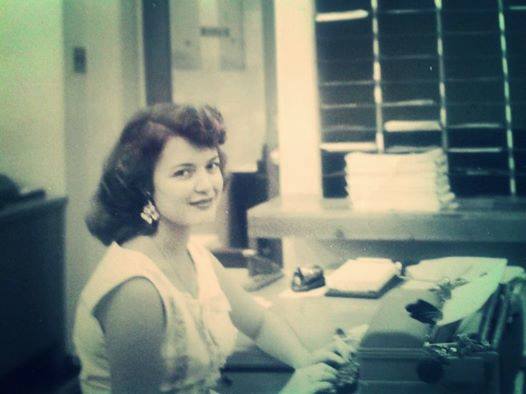 Daniel stayed three years in Bermuda. He worked as kitchen helper in the Belmont Hotel, and the Elbow Beach Hotel.  He returned to Saba but went back to Bermuda and stayed there a total of eleven years altogether. He came back to Saba and got married at the age of 29 to Susan Zagers. They couple had one child, their daughter Cynthia Goud-Johnson who lives on Aruba and was here recently (1985) with her daughter visiting ‘Pat” as he is popularly known.(After this was written she, her husband and her two children moved to Rotterdam and in the meantime her husband has passed away).

After he married he went first to Curacao to work for the SHELL oil company where he first worked in operations and also worked as a fireman. However Sabans have the salt of the ocean in large measures in their blood and it was not long after that he that he took to the sea on the Shell oil tanker the ‘Josephine’. He quit later, returned to Saba for some time and then headed out again. This time to the island of Aruba to work for the ESSO oil company. There he once again worked on the oil tankers. Later on he worked in the dining hall until he received his pension in 1961 and returned permanently to Saba where besides his wife Susan he had a large number of nieces, nephews, sisters and brothers as well. 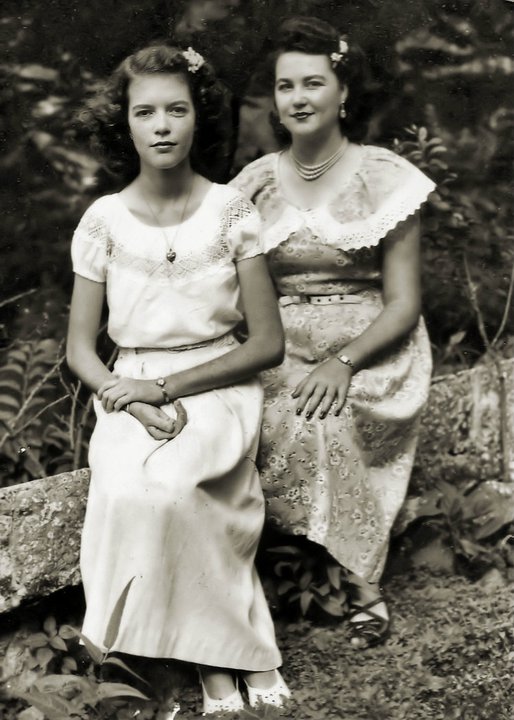 Cynthia Johnson -Goud and her cousin Rose Weerd-Johnson both of them married Dutchmen and ended up in Holland.

When the Captains Quarter’s Hotel was opened in 1965 Pat went to work there as the Chef and worked until 1970 or thereabouts.

Daniel has fond memories of his youth in ‘Mary’s Point’ even though he describes life there as having been very ‘tough’. All there was to do there was farm the land (work in the ground as we say) and fish in boats or along the cliffs. His father had 13 children by the two Bail sisters from Middle Island as well as “Long Charlie” (Charles Simmons brother of James Anthony Simmons). They all grew up in a 2 roomed house. He said they always had plenty food, they even used to give away food to other people. The land above ‘Mary’s Point’, was good farm land and was always worked out. They would exchange their produce for coffee, sugar, clothing etc. They did not keep cattle, goats or sheep but they always had plenty pigs. Every day they had fresh fish to eat, fresh fish and potatoes. Pay says you could get up in the morning at Mary’s Point, run down the cliff and by eight o’clock AM you could be back home with a large string of fish. He says ‘we all worked like hell but overall had a good life and regrets that there was no good school’. He did learn to read and write from Mr. John Skerritt a school teacher who came here from Montserrat to teach the children of Mary’s Point. I have an old photograph with Mr. Skerritt’s class with Pat in the photo as a young boy. 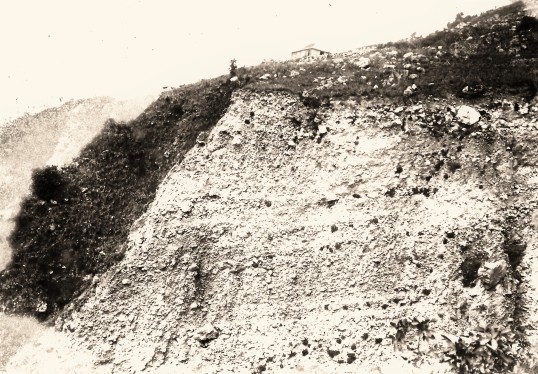 Henry Johnson’s house at the edge of the cliff at Palmetto Point.

Just a couple of weeks ago the bulldozer made the final approach to the Well’s Bay. When completed one would be able to drive in comfort to well’s Bay and the walk from there to ‘Mary’s Point’ will seem like a leisurely stroll.

For people who lived there though it was quite isolated. In 1934 most of the residents of the village were moved to ‘The Promised’ land in The Bottom, while others including Pat’s father Henry moved to Hell’s Gate. When he died he was buried in the yard of his daughter Laurie and her husband Herman. Many people feel that if the village had not been removed that a road would have been there years ago and the village would still be there. However the other problem was the fact that the cliffs below ‘Mary’s Point’ had started to erode and has become worse in recent years. This was a special threat to the continued existence of the village. 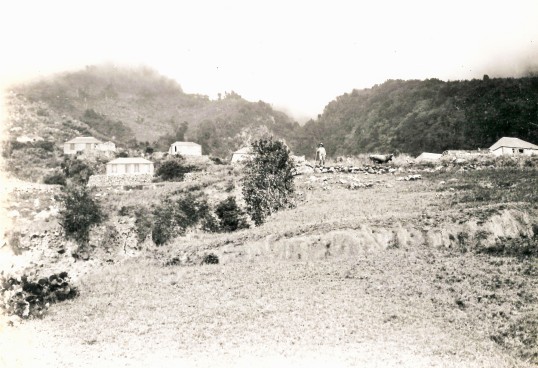 The village of Palmetto Point as it looked in 1909.

Pat has lived long enough to see many changes on Saba. Who knows, if he lives some more years, if he will not again see houses in his former village. Even a little hotel and perhaps Pat can have the honour of cooking the first meal in the ‘Mary’s Point Lodge’.

I remember after this interview I made a drawing of the village based on what he told me. When I showed it to him he was amazed and could not believe that it was not done when the houses were there. Years later after he had given back his soul to his God, I found two photo’s in the Dutch archives. One of them shows his father’s house teetering on the edge of the cliffs. He would have been so happy to see the old village in which he grew up.