TO THE CANE FIELDS OF THE DOMINICAN REPUBLIC 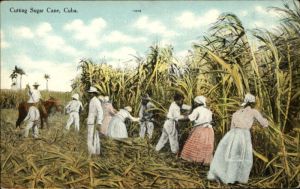 All over the West Indies there were sugar cane plantations during the days of African slavery. Even small islands like Saba tried their hand at growing sugar cane not only for sugar but to make a strong rum called “KILL DEVIL”.

Some years ago on the outskirts of La Romana we stayed in the beautiful hotel called “La Reina Cumayasa.” It is a small hotel surrounded by twenty or more square miles of land belonging to the Barcelo family of Spain. The hotel is located on a height above the Cumayasa river. I had left my friend Elmer Linzey behind in a guesthouse opposite a gas station near the center of La Romana. The guesthouse was compliments of our hosts, but I wanted something quieter. A taxi driver said, “If you want quiet I have the place for you.” When the wife and I drove up to the hotel they were amazed. The manager said that they had never had people drive up without reservations and ask for a room. We got a real good price and it was all inclusive. The room we stayed in was so big it was like having three houses in the country. I still have the hotel with me as I brought back seed from an unusual palm tree located at the front of the hotel and the palms are now in front of the Government Administration building on Saba as well as at the Saba airport terminal building. You would think that I would be around the swimming pool relaxing. Instead my wife had to ask me what in the name of God was so interesting about Santo Domingo phone books. She had seen me doing the same thing in the Howard Johnson hotel in the city of San Pedro de Macoris. What kept me so busy all morning was studying these phone books and taking notes of surnames. The ones I was interested in were mostly those from the former British, French and Dutch islands between Nevis and Anguilla. In the San Pedro de Macoris phone book I found some 186 different surnames and in La Romana at least 110 of people who could have descended from these seven islands. There were hundreds in total of course, but I just noted down one of each. So if there was an entire page of Richardsons’ only one of my totals in each place was a Richardson. As a boy growing up we used to hear stories about Saban and Anguillan owned schooners taking people down there to work in the canefields. I had a great uncle John Leverock Johnson, an elder brother of my fathers mother who owned a large schooner. He used to trade there carrying people from the Leeward Islands. If he followed the trend of the day he must have left some little people down there as well. He had a son on St.Barths so he was already known as a drifter from the home front. Sailors and all that you know. Some years ago then Senator Kenneth van Putten and I were sitting at the airport on St.Maarten. We were on our way to Curacao. It seemed like nearly all the workers were speaking Spanish. We reminisced on the days when only a few of our older people were able to say a few words in Spanish. People like my old friends Milton Peters, Lionel Bernard Scot, Piasco Wilson, Capt. Austin Hodge and others would tell me stories about their stay in Santo Domingo. I lived with the Hodge(Velasquez) family for about ten years. We had a dog named Ramon Natero after a wellknown rebel leader who fought against the United States occupation of the Dominican Republic. Captain Hodge used to tell me that he had met the rebel leader once in person at a dance. 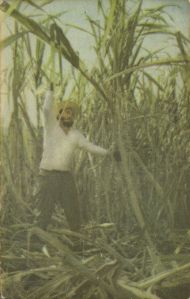 Rebel socialist leader Fidel (Castro) showing workers in the cane field that he can carry his own weight in the cutting of cane. 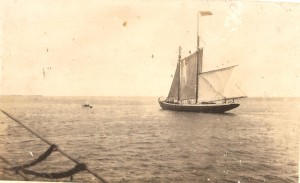 One of the many Saban owned schooners. This one is the Mona Marie of Capt. Laurie Hassell leaving Aruba in 1935 with gasoline for Barbados.

The large schooners which transported them were rented by Dominican sugar factories. The labourers left the women, children and elderly behind. This created a labour shortage in the Leeward Islands. Planters here in these islands were forced to employ women and the elderly to cut sugarcane and pick cotton.The Dominican sugar factories were controlled by United States capital interests. In 1924 the United States sugar companies controlled 438,182 acres of the best farmland in the Dominican Republic. In 1927 they controlled 6.3 million acres in Cuba and 75 sugar factories there produced 62.5% of Cuban sugar. Some scholars estimate that of the 4.2 million tons produced in 1924 in Cuba more than 75% was controlled by financial interests in the United States. Migration statistics from Nevis and St.Kitts alone register more than 90.000 workers who went to the Dominican Republic between 1914 and 1939. This does not mean they remained there though some of the single men did stay.
Many workers repeated the trip numerous times until they grew older or tired or until they had saved enough to buy a plot of land or improve their homes on their homeland islands. Others settled in the vicinity of San Pedro de Macoris, La Romana or Puerto Plata. Dominicanos nicknamed the labourers from the West Indies “cocolos”. The origin of this name is not clear, but it is widely accepted to be a corruption of “Tortola”, Spanish for an inhabitant of that island which also sent labourers annually to the Dominican Republic. The 1935 Dominican population census regsitered 9.272 “cocolos” working there. Due to emigration the population of the Leeward Islands declined between the years of 1901 amd 1921. At least 2.000 Leeward Islanders settled in the Dominica Republic, and close to 1.000 moved to Bermuda. Whereas many of the migrants from the Dutch and French islands in the Leewards booked passage via St.Kitts to Bermuda and especially the U.S.A. these statistics would also reflect migration patterns from these islands as well. These numbers are small, however, when compared to the number of people who migrated to the United States in search of higher wages and better living conditions. Nevis and St.Kitts together lost about 12.000 inhabitants to the United States between 1900 and 1920. Nearly 60.000 people from the rest of the British West Indies immigrated to the United States. Between 1901 and 1921 there were more than 80.000 West Indian immigrants registered in the United States. Most of the migrants were peasants or proletarians who descended from the plantation slaves of the nineteenth century. Many of them had even been born into slavery. The British West Indian freedmen who had become peasants by occupying or buying Crown lands, or by squatting on plots outside of the plantations, were frequently unable to earn enough cash to sustain their families. Emancipation did not turn them automatically into peasants, and many became proletarians who were forced by economic necessity to return to the plantations as salaried workers. The lenghty economic crisis of the British West Indies in the second half of the nineteenth century created a sizeable supply of labourers who were forced to leave their homeland islands to earn cash elsewhere. Dr. Johan Hartog in his book “De Bovenwindse Eilanden”, also mentions seasonal migration patterns in the Dutch Windward islands. St.Martiners mostly went to the sugar plantations in the Dominican Republic in Cuba and in Puerto Rico, as well as to the phosphate mine on Sombrero. At the end of the 19th and beginning of the 20th centuries an exodus began to the United States from the Dutch islands. Also to the island of Connetable (French Guyana) for mining phosphate there. Also to St.Kitts where the salt ripened earlier. Women also took part in the seasonal migration to harvest salt on St.Kitts. After a month or two they returned to St.Maarten where the salt was then ripe for harvest. Statians hardly went to the Dominican Republic, but sought employment as labourers in the harbour in Bermuda, in Demerara and also in Trinidad. Because of the work provided by the whaling fleet, Statians also migrated to New Bedford, Massachussetts, as well as to New York. Sabans worked as seamen in the United States and also went to Bermuda in large numbers. The Bermuda museum statistics claim that Saba provided the third largest group of permanent settlers to that island. When the Boer War broke out in South Africa

,
the British employed especially white Sabans as guards to work in the prison camps on Bermuda. In 1902 there were more than one hundred Sabans working in the prison camps. The British mistakenly believed that Sabans could speak Dutch and would be able to communicate with the Boers. As a boy I remember old Sabans telling stories about the various Generals like Viljoen, Melaan and so on with whom they had made friends while working in the prison camp Captain Ernest Alfred Johnson in his book also mentions this. In 1898 when the male population of St.Maarten including boys was 1546, no less than 420 men of that island went to the Dominican republic to work. In 1901 of the 1239 males there were 761 who were working in the republic which was nearly the entire productive working force. For Saba in 1912 out of a male population of 774 (excluding boys) there were 530 working off-island (mostly as sailors and Captains). In 1906 about 20 Windward Islanders went to Surinam in search of work on the construction of a railroad. They could not take the climate however and most returned in 1907. My former boss Joseph Alphonse O’Connor told me that Saban owned schooners used to carry salt to Surinam and that as a young boy he went along with Captain Herman Simmons on a large schooner to Surinam and back. During World War 1 the seasonal migration from St.Maarten to the Dominican Republic increased. From 1885 to 1895 the population of the three Dutch Windward Islands declined by 14% (from 8623 to 7402). And since it was nearly all men who left, in 1895 there were 45% more women in the three islands than men. The transportation was horrible. As many as 200 to 300 men were crowded into schooners. There were even deaths at times due to unhygenic conditions caused by crowding. 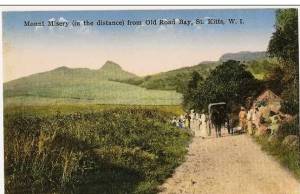 On November 20th 1907 a schooner from St.Maarten (not a Saba captain though) left that island to go with a large contingent of men to Connetable. On December 30th the vessel returned, after not having found the island. Conditions on board were so bad that food had to be rationed. So great was the labour shortage on St.Eustatius that the following incidents are recorded. In 1912 because of a landslide by the Bay Path, the government brought in forty labourers from Curacao. And in 1914 when the historian J.H.J. Hamelberg rented 500 acres of land from W.J.Mussenden on which to plant sisal, Governor van Grol had to import 22 labourers from Curacao, 20 from Nevis, 25 from Aruba and one Venezuelan. On Sundays Father Bertrandus Krugers O.P. who was fluent in Papiamento even preached in that language for the newcomers from Aruba and Curacao. 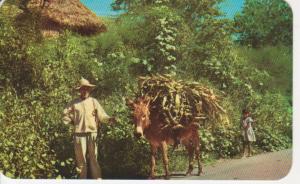 Farmer going home with cane tops for his cows.

In a previous article I mentioned that two distant Dinzey relatives who migrated from St.Kitts to the Dominican Republic had gone forth and multiplied. One had 54 children and the other had 38. And so you can see that the reason why they (the Dominicanos) are now here is because WE were once there. ******* 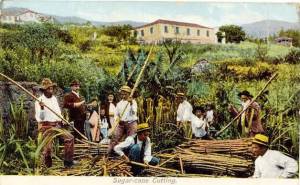 Harvesting cane on one of the great plantations in Cuba. 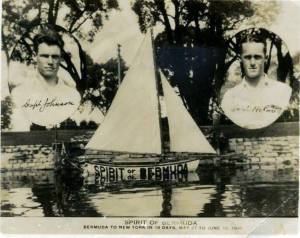 Many Sabans went to Bermuda to work for the dry docks there and as prison guards for the South African prisoners of War during the “Boer War.”