On my recent trip to Aruba I went to visit Mrs. Carla Waal a friend I had met at the Carifesta in Trinidad in 1992. She has two paintings in her home by the well-known Saban painter Mrs Barbara Kassab born Every who resides on St. Kitts. Carla who is now 88 wants to donate these two paintings to the Harry Johnson Museum on Saba. She despite her age is sharp as a tack and takes care of her house herself and lives alone. She has two children living in Holland and she has been living on Aruba since 1950.

She loaned me a copy of a booklet of a Saba Art Exhibition held on Aruba from March  11th through 16th, in the year 1983. The original booklet is a lot clearer than the photo’s I have photo copied and later scanned. I am hoping to get an original copy of the booklet and scan it again sometime. Cara does not want to part with anything yet as she enjoys the paintings so much. However my son Teddy Johnson of Johnson’s Notary services on Aruba will fix some document for her so that the paintings can end up at the Museum in due time.

Miss Glaydys Hassell well known “Spanish Worker” maker. A true artist in her work representing so many other Saba women who did this for their own and their families survival in former times. She was also for many years a teacher of this art in our schools here on Saba.

As can be seen from the postings in this article Saba had quite a few artists who were doing various things. Some of the work of Sabans from former times can still be appreciated in the museum named in honour of Harry L. Johnson who had started a small Museum next to his home. He compared his style of painting to Grandma Moses and quite a number of his paintings were purchased by visitors tot he island and ended up in a number of countries.

This is the former home of the grandparents of Saba’s most known painter Barbara Kassabb-Every.

Visiting Ms. Carla Waal at her home on Aruba in October 2014. We met at Carifesta in Trinidad in 1992 where she purchased two paintings of Saban artist Barbara Kassab-Every. 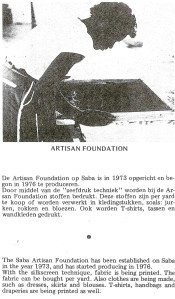 Mr. Carl Mervin Hassell showing a sample of Macramé which he used to teach to interested people here on Saba.

Ms. Juliette Johnson at the Saba Artisan Foundation. Here is where many Sabans learned to do silk screen printing.

Aunt Maude Linzey from Below-The-Gap making one of her famous straw hats. Together with “Aunt Sue” Suzanna Blijden or Blyden they used to give lessons at the Public School.

Artist Patricia Marie Johnson. She is still painting after all these years.

The traditional Saba Houses built by local carpenters with hand tools are themselves a unique Saban art form. This was even exported as in former times Saban carpenters like Alhonsius Hassell, Tonce Hassell, and others would be asked by St. Maarteners to build some of the former lovely wooden houses on the Front street. This was the home of businessman Bloomfield Hassell, afterwards bought by John Joseph “Josie” Simmons who then sold it to Miss Marguerite Hassell. 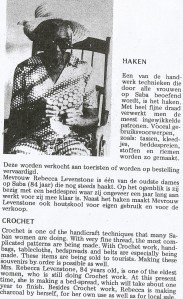 Rebecca was an all rounder. I have written her life story before and it is also posted on The Saba Islander.

Despite many health issue not the least being a heart transplant Barbara is still with us in the land of the living and lives with her husband Bichara on the lovely island of St. Kitts. She had never forgotten the island of her birth and when in better health she used to visit here often.

The old four poster bed in the musueum named after Harry Luke Johnson is covered with a bed spread made from the famous Spanish Work from which for over a century many Saban women helped their families to survive. 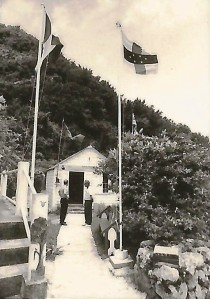 Administrator Eugenius Achilles Johnson visiting with Harry Luke Johnson at his private museum . Before he passed away I promised him that while I was in government I would find a place for the island to have a Museum. With a $20.000 grant from Mr John Goodwin I started a Foundation named the Harry L. Johnson Foundation and with help from the Minister de Gaay Fortman of Holland was able to buy the lovely home and property where the Museum is located these many years. Even this achievement people coming from the outside world and who did not like me politically tried to pretend as if I had nothing to do with it. 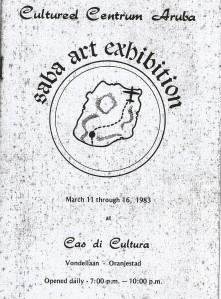 Brochure of the House of Culture on Aruba put out at the time they held the Saba Art Exhibition.

Harry Luke Johnson founder of his own private museum and then after his death honoured by giving the name to the new Museum in his honour as being the first to come with the idea of a museum for the island.

One of Harry,s many paintings some of which are spread to many different parts of the world.

The indigenous population of Saba is in a serious state of decline for a number of reasons which I will not get into. The last years in my books and other writings I have been trying to defend the role our people played in their own history. I have been doing this against an onslaught of people not from here trying to bring our people down. I have been doing this without financing from either the local or the Dutch Government. I have been doing this for love of my island Saba and all the other islands in the Dutch colonies in the West Indies as well as the former British West Insides and the French islands. Our young people can be very proud of what Saba people have achieved at home and abroad. And to those coming here and thinking that they own our culture and history I wish to remind them that when you settle among other people you bring your culture with you. If your culture consists of only bad manners and you cannot adjust to our people and culture then it is obvious that you should consider moving back to a culture more pleasing to you. Sooner or later you are going to run into trouble with the people of the island where you have settled. Some have already run into trouble with me and no one is going to tell me that I do not have a right to my own opinion on an island where my ancestors have lived for close to fifteen generations. Enjoy the history even if you do not agree with my views!!