The poet Rafael Obligador, known in the annals of Argentine literature as “The Singer of the Parana,” loved the landscape where he grew up and he evoked the place in these simple lines.-

Of my boyhood years!”

I have been trying over the past years to share with readers the history of and love for the islands in which I grew up lived and loved and which were the sweet refuge of my boyhood years.

The Dutch first colonized St. Eustatius in 1634. Having denied any Dutch ancestry for the better part of my life, to my dismay and even distress some years ago I dug up a Dutch ancestor on one of my trips to the Dutch archives where I spent lots of time before the advent of the internet. He was on the first boat to come ashore and claim the island for the Dutch.

From the book “Het geslacht Heyliger” by Mr. R.H. Calmeyer we read: “By orders from the gentlemen from Vlissingen Jan Snouck, who therefore as patron had received patent from the West India Company, Peter of Courcelles, on board of an armed cruiser on April 25th 1636, accompanied by a herring fleet, arrived at the uninhabited Caribbean island of St. Eustatius. This was named by him originally New Zealand. He took possession of the island for the West India Company.

Area where the Dutch first landed to claim St. Eustatius in 1636

His lieutenant (my ancestor) Abraham Adriaensen went ashore to lay claim to the island. He probably landed close to a spot of land owned by me not far from the seashore. Adriaensen who in 1641 became Commander of the island was the father of Peter Adriaensen (Commander 1665) who in turn was the father of Isiah Adrieaensen whose daughter Martha married my great-great-great-great grandfather Mark Horton in 1728. Their son Richard Horton’s tomb (born on St. Eustatius in 1731 –died 4-4-1769) is still in good condition and is located in the Old English cemetery’s graveyard, right across the street from the Methodist Church. He must have been a good man as his mother-in-law Joanna Dinzey is buried right next to him. Her daughter went on to remarry to an Abel Blyden of St.Kitts and moved to St. Barths while some of the children moved to Saba and established themselves there.

Of the many Dutch officials in the first part of the colonization of these islands, we know of none of them whose” likeness” as the old people would say, was left behind, except one.

In W.R. Menkman’s book “De Nederlanders in het Caraibische Zeegebied”, there is a photograph taken of a painting of “His Honour” himself Lucas Schorer. This painting is part of the collection of the “Rijksbureau voor kunst historie en ikonographisch documentatie”, in The Hague.

Portrait of Commander Lucas Schorer in The Hague

From this painting one gets the impression of a most refined gentleman, being served his afternoon tea, with a pirate ship off the coast in the background. Perhaps either the Dutch painter or the Dutch West India Company felt that that was the proper way to portray a Dutch Commander living in the tropics. Nothing could be further from the truth if we are to believe his superiors reporting back to the West India Company on his activities here in our islands. It would seem that he only got the job because his family was an influential family in the Province of Zeeland and shareholders in the West India Company as well.

Lucas Schorer was the Commander of St. Eustatius and Saba from 1687 to 1689 and demoted to Vice Commander of Saba from 1690 to 1696. He left such a reputation behind that from then to now nearly all the Administrators of Saba have been natives to this island and of English, Scottish, Irish and African descent.

He was born in 1657 in Middelburg Zeeland as a son of Daniel Schorer and Maria Backer. According to a letter written by him from Saba on July 20th 1698 to the West India Company there was no one here in the islands that were related to him. He never married and died a bachelor.

On February 4th, 1690, Vice Commander van Beverhoudt wrote to the “Heren X” the bosses of the West India Company that Lucas Schorer was living in a state of concubinage on the island of Nevis with the widow of the late Louis Houtcooper, who in life had been Commander of Saba and St. Eustatius. However after only two months of keeping house with the widow, Lucas Schorer packed her and her children up and shipped them to Surinam, from where she wrote him several letters. Why is beyond me as he had found a nice widow and got rid of her and you would think he would have appreciated that. 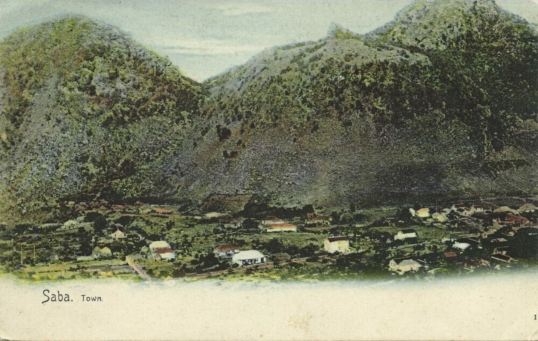 The Bottom from 1890 as it would have looked in the time of Schorer.

Some months later however, on July 20th 1690, van Beverhoudt in a letter to the West India Company retracted all his earlier complaints against Schorer,”as he had allowed himself to be informed by people who turned out to be false witnesses. On that same day Lucas Schorer notified the West India Company that since a few days he had been on Saba. All differences with the people of Saba were set aside after the residents were able to bear witness that they had been misled by false and malicious tongues. As a result they again swore allegiance to him. However on June 20th, 1696 after a Commission of enquiry from St. Eustatius had made a report on their investigation of his conduct he was dismissed as the Vice Commander of Saba. It appears that he had turned to the bottle “kill devil” as it was called back then, and as a result of living it up on Saba he could give no account of his financial administration. And as we well know to this day the Dutch are very particular about how you spend their money.

After that Schorer delayed giving any account of his administration due to illness and consequent inability to write up a report. And as a footnote to history the Van Beverhoudt referred to here was killed by a falling rock under the cliffs between the Tent Bay and the Ladder Bay and to this day the rock on which he was fishing is called “Governor’s Rock.”

The last we read about Lucas Schorer is in a letter from Commander Isaac Lamont of St. Eustatius and Saba dated November 14th 1701 stating that now that the hurricane season is over that he intends to visit Saba and to take Schorer back with him so that together with Schorer he can go over the accounts. Schorer must have returned to Saba however as on the population list of Saba taken on February 3rd, 1705 Lucas Schorer is listed as a resident of Saba.

The process of “Antillianization” began when Commander Lamont replaced Schorer with the native born Jacob Leverock and James Hassell who had been Act. Commander before when Schorer was forced to resign.

Schorer did play an important role though when as Commander of the two islands on Sunday April 3rd 1689 and the days following he defended the islands against the French Count de Blenac. Though unsuccessful the French allowed him and his troops to leave the island peacefully and they went to Nevis. The attack by the French solved a political problem for him as just before that the Sabans had decided to break away from the administration on St. Eustatius and even threatened to join with the English islands as 95% of the European part of the Saban population were descended from people of the British islands who had been left behind by the Jamaican pirates in 1665 supplemented by 90 of their own crew members. The Sabans had even gone ahead and appointed their own Commander and Island Secretary. Their complaint was that the “Central Government” on St. Eustatius favoured that islands interests over those of their colony Saba. Since independence was not the thing to threaten with back then, the best attention getter was for the Sabans to threaten to join into a “Federation”, if you could call it that, with the English islands with whom they shared a common heritage and language.

After Lucas Schorer it was all native Saban Commanders, Jacob Leverock followed by another of my ancestors Charles Simmons and his son Peter Simmons (for the period from 1720 to 1778) followed by Thomas Dinzey and the Beaks dynasty which included Mozes Leverock (married to a Beaks) and continued up to October 15th, 1875 when Jan Jacob Beaujon Quast was appointed Lt. Governor.He came from Curacao but was descended from one of the many French Hugenot families who had colonized St. Eustatius together with the Dutch. I will do a separate article on those who served Saba as Administrator over the centuries albeit with various titles ranging from Commander, Vice Commander, Vice Lt. Governor, Administrator, Lt. Governor and now Island Governor.

It seems that eventually Lucas Schorer got fed up with the Sabans and removed himself back to the metropolis (St. Eustatius). He is buried in the cemetery of the Dutch Reformed church there. And I still cannot get over the fact that he would send away a widow to Surinam and live a lonely debauched bachelor life on these small islands. That alone would have given me a very negative opinion of him. Zorba the Greek would have said;”To refuse a widow is counted as one of the greatest of sins.” And so in my book, Lucas Schorer goes into history through his portrait in The Hague and sending the widow to exile in Surinam!!