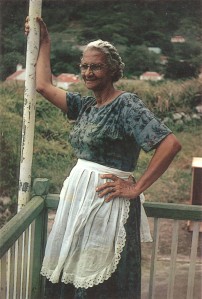 Miss Cornelia Rosina Jones was born on September 10th, 1907, at St. John’s, Saba. She was born from a mixed marriage, something not unusual in the history of the village of St. John’s. Her father was a black man, Fernandus Jones born on June 2nd, 1877 and he died on December 22nd, 1943. He and Frederick Zagers and a number of other men were lost when a storm came up while they were fishing on a small boat out on the Saba Bank.His parents were George Jones and Sarah Stevens. Her mother was a white woman named Mary Jane Hassell( who died on November 13th, 1954) of whom I did not find any more records, but I remember her personally as a boy.

Miss Jones had three siblings: Alfred Jones born July 18th, 1897, Eleanor born September 10th, 1901 (she lived to well over 100 years of age and died in the USA.) and Leonard born February 6th, 1910 and died May 5th, 1959. As a baby he contracted polio and was handicapped. In those days of uncompromising language usage he was simply known as a hunchback. As a boy this disease as well as leprosy was discussed so often that I was worried that I might catch either one of these dreaded diseases.

Miss Jones grew up in a much different Saba than we know today. I guess her personality was shaped by her mixed parentage. Something like Barack Obama she was comfortable and loving with both her white side of her family and heritage as well as with her roots coming from Africa.She is best known as a hostess. Running the government guesthouse in The Bottom, and later on in the Windwardside. Because of this she was well known with visiting officials from the other islands as well as from The Netherlands. She was often featured in magazines and in newspaper articles. Not because she was famous but because she was there. There were many journalists and writers coming to the island and would always mention something about the guesthouse and Miss Jones. Everyone on Saba called her “Cutchie.”

When the Little Bay Hotel was being planned, the same Dutch group also planned a hotel on Saba at the Guesthouse in The Bottom. It was a lovely plan with new construction of ten hotel rooms and a swimming pool. The Island Council turned down the request to build. Only the late Matthew Levenstone and Arthur Anslyn were in favour, whereas David Doncher, Eugenius Johnson and John William Johnson voted against.

Many years later I asked Eugenius how was it possible that their party could have turned down this offer. He confessed that Miss Jones was a member of their party and that the investors had refused to guarantee her continued employment at the new hotel when it would be completed. That was in 1955. So looking back in time you can see how important a role Miss Jones played in the political life of Saba back then.

You will also be able to see that politics was the same then as it is now in the world.

Miss Jones’ brief stint into the political life of the island made more history than the cancelation of a much needed hotel project. I remember when Mrs. Elaine Gumbs-Vlaun was elected to the Island Council of St.Maarten in 1983. Her party members were playing the woman part up big in the island council meeting. Obviously they were unaware of Miss Jones, until Mr. Claude Wathey got up and reminded them that Miss Cornelia Jones of Saba had been the first woman member of the Island Council of the Windward Islands and indeed she was.

Miss Jones entered active politics in 1951 as a member of the Nationaal Volks Partij. On August 17th, 1953 she entered the Island Council to complete the term of Mr. Kenneth Peterson who had resigned.

In 1951 Miss Jones together with two other females Mrs. Ursula Dunkin-Hughes and Mrs. Millicent L.Wilson, born Simmons, (grandmother of present Island Councilmember the Hon. Rolando Wilson). Miss Jones got 0 votes, Ursula got 4 and Miss Millie got 4.

The 0 came about probably because she had agreed to vote for another candidate on her party.

In 1955 she contested the elections on the Democratic Party but she did not get reelected. She did get 3 votes though, a big advance compared to the 0 in 1951. The other women threw in the towel and in 1955 Miss Jones was the only female candidate.

The Island Council meeting to which Miss Jones was admitted to the council took place on August 17th, 1953. Mr. L. Reginald Carty the Administrator at the time presided over the meeting. First to be dealt with was a letter from Mr. Kenneth Peterson dated July 25th, 1953 requesting his dismissal from the council. Then a committee to verify the credentials was appointed consisting of Mr. David Doncker, Mr. Dalick Johnson and Mr. Ulric Hassell, Commissioner, but not a member of the Island Council.  Mr. Peterson was not present at the meeting.

The only one to speak at the meeting was Mr. David Doncker who threw out but a few sarcasms. He said:” I have always been kept down in the Council. No matter what I ever asked for has been turned down, but all I have to say is that there has been a shift in the wind. Where it was blowing from it is not blowing from anymore.” 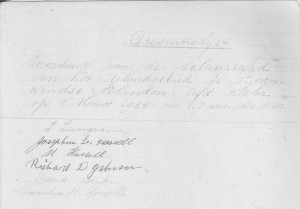 The meeting ended at 2.45 pm and Miss Jones went into history. 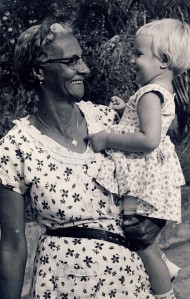 Another photo of Miss Cornelia Jones with one of the little people whom she loved.

I always experienced her as a jolly person who liked a good joke. She could see humor in any situation. Her family home was uniquely located on an outcropping of St. John’s overlooking The Bottom. On the way up from Fort Bay or The Bottom one would run up the side path to their home to beg a glass of water. It is a great pity that the house was torn down after her death and the property is still unoccupied. It would make a great location for a new home.

Although she had no children of her own she loved the little people as only a grandmother could.

Miss Jones was a Roman Catholic. She never married or had any children, but several of the photo’s which I have of her she is always seen holding a child as lovingly as any grandmother could.

As is customary on Saba, when Miss Jones passed away she was buried in the family burial ground next to the home. I am certain that if anyone built a new home there that Miss Jones’ spirit would not bother them. After all she loved company. That was what she lived for. She never went anywhere to school to learn how to treat people and how to live with people of all races and creeds. That was a gift she was born with and in looking around she must have decided that all men are equal before the eyes of God and should be treated courteously and respectfully.

Before concluding this article on my way to a meeting in The Bottom I went up through the bushes past the ruins of Miss Jones’ former home.

I found her grave next to that of her mother and her brother Leonard.

I found a conch shell close by and I placed it on the grave while giving Miss Jones a talking to that her memory would not be forgotten. She died on December 23rd, 1979 at the age of 72. I later dug up the information in the “Saba Herald” and found out also that she had been given a decoration by Her Majesty the Queen for her many years of service to the island of her birth. I only hope that someone who cares for history will end up owning the property and will see to it that Miss Jones and her family will rest in peace. Amen.