Respect! Police constables Clement Sorton (against the wall) and Jeremiah Leerdam on patrol. When these old timers from Saba were on patrol the town shook and you gave them the respect due to them.

Nowadays with so much talk about law and order and the police force there has been much discussion on life in these islands in former times. Anthony Weller wrote in  ‘A childhood in Nassau’ the following: “For a writer, childhood is the treasure chest; one has the rest of life to measure out by the fistful the amazing, gleaming pirate’s hoard buried many layers deep in the imagination.”

I came across an old photo of three Johnson’s in uniform who served as country constables in the Windward Islands. My intention was to write an article based on their lives. However the more I thought about it I thought it would be better to write a short history on the country constables and those from Saba who served in that function when I was a child growing up on Saba.

In Curacao and on the other islands the maintenance of internal law and order from the beginning of the colony was a task of armed civilians.

An ordinance of Jan Gales of August 31st, 1739 decreed for Curacao in article 2, among other things, that each citizen in turn would have to do evening duty patrolling the streets of the town.

Only at the start of the 19th century can it be said that a modest police-force came in to being. In 1826 a regulation for the police force was approved by the King. After various changes in the functioning of the force, in 1873 (Publication Sheet # 6) it was determined that the armed police force for all the islands would consist of a brigade  is of Mr. Roelf Westers (born Martinshoek on October 11th, 1866) who was married to my great – aunt Sarah Ellen Johnson. She was born on October 6th, 1871. She died in Wittem (South Limburg) on April 21st, 1962. He was a marechaussee on Saba. They had three children, one born on St.Maarten, one on St.Eustatius and one on Curacao. Henry the one born on St.Maarten had twelve children so that I have a whole set of red head cousins in Groningen. If you come across a Westers and he or she is from Groningen you can tell them that their cousin Will sends greetings.

There were other marechaussees who married Saban women. The Jonkhout family on Curacao and other families trace their ancestry back to Saba via the marechaussees. Mr. Eert Sloterdijk was a country constable and also produced a large Saban family.

Some of the natives who served as country constables on Saba but also in the other Windward Islands were:

Constable Clement Sorton ringing the bell on the hour to give the people of the town the time of day.

Clement Sydney Oliver Sorton , born September 2nd, 1907. In ‘Saba Silhouettes’ by Dr. Julia Crane there is a long interview with Clement on his life on Saba. His sons Sydney and Rudolph followed in his footsteps and Sydney eventually became Lt. Governor of Saba. Clement joined the police force when the old country constables were abolished. 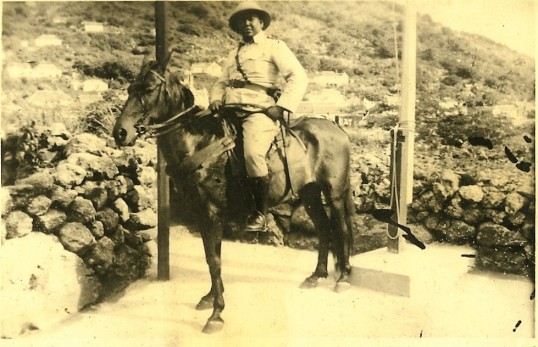 Constable Jeremiah Leerdam here at Windward Side on his horse. The constables had horses and men to take care of them do messages and so on.

He served on Saba and then was transferred to St.Maarten. He was a well known photographer. He is the uncle of Mr. Max Nicholson and his sister Carmen Simmons born Nicholson. He died in a tragic accident on Cole Bay Hill. His colleagues on Saba were always upset that because of political reasons they felt he had been transferred to  St.Maarten. He was married to Amy Hassell and has a son by his marriage residing on Curacao. But being a field man in uniform and with a camera to booth a number of people in the islands will tell you that ‘Leerdam from Saba is me father.’

Osmar Ralph Simmons born October 24th, 1922 joined the Police force as a young man, and like the others worked on St.Maarten for some years. He spent most of his career on Saba though and eventually was Police Commander here. He had a large family. His wife is the well known Mrs. Carmen Simmons. His children are making a name for themselves as well. He passed away some years ago and remained active in Saban society until he took in ill and died.

Some of the constables entered the Netherlands Antilles police force such as Major Osmar R. Simmons.

Lucius Bernard Halley, was born September 30th, 1907. He was from Simpsons bay and was married to Sydney Dowling of St.John’s. They had 12 children and produced an important Antillean family. Halley owned the home in The Bottom where Philipsburg Utilities used to be. He bought it from my uncle Capt. Reuben Simmons. When he died his family moved to Curacao and the property was sold to Senator Claude Wathey whose children still own it.

Chief Constable Bernard Halley on his horse on patrol and headed to Windward Side.

Richard Austin Johnson was born October 16th, 1908 and died April 19th, 1990. As a young man he served as one of the two local councilors. He was an only child and his wife as well, something unusual for Saba at the time where large families were the norm.

Their four children are all staunch Roman Catholics and can be seen every Sunday in church. Austin was moved twice to St.Eustatius for political reasons. He loved to read. He told me that when he was on Statia the last time in the nineteen fifties he read every book in the library. The day he read the last book when he returned to the Fort the Administrator called out to him and told him the good news that a telegram had arrived giving permission for him to return to Saba and to his family.

Constable Richard Austin Johnson, later also a policeman. Was transferred to Statia because he ventured a small political opinion. Nowadays we all know or have felt the  police presence in our local politics.

Harry Luke, Johnson was born November 19th, 1913. He had a terrible youth. His father was lost off Cape Hatteras on a four master schooner the ‘Benjamin F. Poole’ which was lost January 19th, 1914. His mother died of cancer when he was four. He and his three brothers were raised by an old aunt who was dirt poor and who died when he was eleven. At the age of 13 he went on a 100ft schooner from Saba the “Maisie Hassell” on which he sailed for 8 months between Barbados, Guyana and so on. At the age of 18 he went to Bermuda and married there to Doris Every also from Saba and his first two children were born there. He returned to Saba and became a police constable. He was an artist at heart. He built model boats, painted and wrote poetry. He started his own museum. Just before he died I promised him that I would start a museum to carry on his work. The Harry L. Johnson museum is a proud legacy of his work. Of all the things I have done for Saba I am most proud of having been able to acquire this lovely property for the people of Saba.

Harry L. Johnson walking down the steps from the old Police Station. Sitting above are Freddy Jones on the right and Hubert Zagers on the left. They did an assortment of jobs for the constables. They took care of the horses, ran messages between the villages and accompanied lone  constables on patrol.

As a young man he went to New York and sailed out from there for some years. He returned to Saba, started working for the Post office and later became a constable. He did not join the Police Force as the Dutch language was required and he did not feel up to it. He was a life long bachelor and worked for Public Works. He died in his nineties. 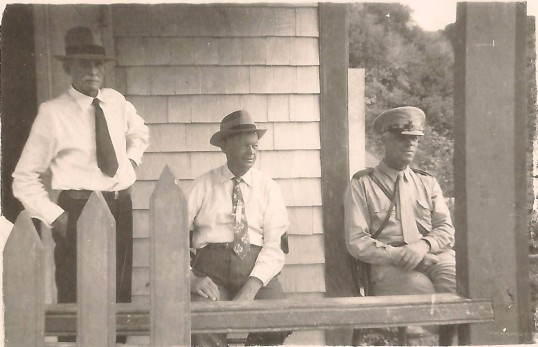 People liked their constables back then. Here Harold Johnson sitting for a Sunday morning chat with Algernon Hassell, standing and Carl Hassell seated.

One tough Police officer. As boys we knew to clear the road when Lester was on patrol. He had a large family and when threatened with a transfer to Curacao he decided to leave the force and join Public Works. He was a good foreman and many roads were built under his supervision. His sons Harris, Eddie, George, Wayne and Ray are all active in the Windward Islands.

Before you ventured out on the street to play marbles or spin tops you would first find out if constable Lester Peterson was on duty. However he seemed to always be on duty. Here he is in his civilian clothes helping Harry Johnson leading a parade of the Anglican church.

Many old timers remember with pride the days when the force consisted of Saba policemen. Halley the Chief Constable though from Simpsonbay, was considered by all to be a Saban. (The same goes for the merchant Joe Vlaun). Later on Major Osmar Ralph Simmons headed the force for many years. Clement Sorton was a no-nonsense constable. Whereas Lester Peterson kept the Windwardside calm, Sorton was the man of The Bottom. He was a big man and when he was on patrol the town literally trembled.

Finally, to my old aunt. Her daughter who was a Roman Catholic nun told me that her mother never spoke Dutch. She said the Dutch government had treated Saba badly. For those times she was right. Things have changed. Now we are going in to a new relationship with the Dutch. Perhaps the constables can be brought back in to play. Many of the young people who would want to join the force have a problem with the police training being all in Dutch. In any event Saba can be proud of those who served us as Constables in the past. *** This article was written several years ago. Sadly the Dutch have made absolutely no effort to involve Sabans either in the Police Force or as Customs Officer and they make so many foolish rules that ones gets the impression that they are trying to root out a traditional English speaking people. In the beginning of the last century many people left Saba to live on Barbados because the Dutch introduced their language as the language of instruction. It would seem that they have plans to do this again.