THE ROAD WHICH COULD NOT BE BUILT 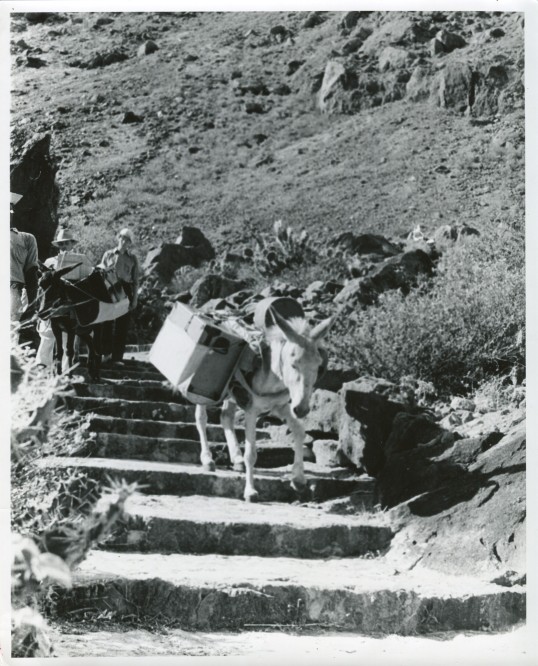 Transportation by donkey down the old step road leading to the Fort Bay.

I would like to give a mainly history in a series of photo’s on the building of the road on Saba. For generations Sabans climbed the slopes of the mountain to get up to the main village. As more and more Sabans visited the United States on schooners from Saba they experienced the transition from the horse and buggy era into the motorized world of the rising power the United States. There were a number of prominent people among the Simmons’ family and others at the start of the twentieth century who felt that better could be done. They questioned if it was not possible to build a decent harbour and others wanted to know why Saba could not have a dream one day of having roads on which motor vehicles could be driven. 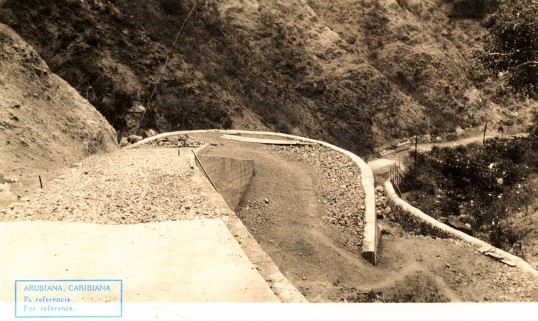 Construction of the S-curve. Designed by the Department of Public Works on Curacao.

As with so many other aspects of the history of our little island many fanciful stories were and still are being written which have no real basis in truth. And so it is with the road. Mr. Errol Hassell who was a local councillor in the ninteen thirties is the man who made it possible to get funding to start this road. He had lived and worked in New York like so many other Sabans at the time. He had seen the changes in New York  when motor vehicles took over from the horse and buggy period and the rapid progress taking place in that place.

Local Councillor Errol Hassell cleaning up the Saba Cabbage’s next to his grandfather’s grave.

The other group who deserve a lot of credit for the road  were the men from the village of Hell’s Gate. For them it was a mission to get the road to their village which was at the end of the line. They received extremely small wages and worked hard and without any mechanized help to build most of the main road. 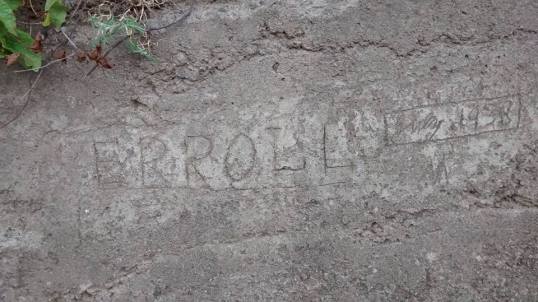 Here is the proof of Erroll Hassell’s involvement with making the road possible. Rudolph Johnson found this engraving on the way to the Fort Bay with the name of Erroll and dated July 1938. Proof that he was rightfully proud of his contribution to make the first part of the road possible.

While it is said that there was no help, the first part of the road from the Fort Bay to The Bottom was engineered by the Department of Public Works on Curacao. I once saw the plans and they should have been in the government archives, but between hurricanes and different people making decisions on what should be kept and what should end up on the dump many documents valuable to the history of our island have been lost. But trust me I did not dream this up.

This is how it was for a couple of centuries. Porters had to head everything up the step road  to the villages up in the mountain.

Mr. Josephus Lambert Hassell was living on Aruba at the time and came to his native Saba after that portion of the road had been built. Giving credit where it is due he engineered the road from The Bottom to Flat Point and a number of side roads leading off the main road, like the ones to Booby Hill and the Rendez Vous and so on. He deserves a great deal of credit. But it was not so that any Dutchman told Sabans that a road was impossible to build. It is true though that Island Administrators, at least those who were Dutch and the Governors on Curacao tried their utmost to spend as little as possible on the islands outside of Curacao. From 1816 when the Dutch took over Saba from the English the island was left to its own resources for the most part. More than a hundred years after that event Saba had a very minimal budget most of which was brought up locally from a limited number of taxes imposed on the population

Mr. Josephus Lambert Hassell pictured here with a tourist friend in front of the home of his brother Peter and the next house is his own home. Early nineteen seventies.

Started in 1938. First steps broken up by Thomas Hassell, Norman Hassell and James Horton Simmons all three were laborers from Hell’s Gate and were paid f 0.65 cents per day.

Road stopped for some years and restarted in December 1941. The S was designed by the Department of Public Works on Curacao.

18 March 1947 first Jeep for the Administrator arrived with the M.V. “Kralendijk”.

Administrator then was Max Huith.

Driver who landed the first Jeep was Oliver Zagers of Hell’s Gate.

Two cargo boats were strapped together and a platform was placed on top of the two boats. Another row boat rowed the two boats with the Jeep on top to shore and then a rope was used to pull it in. Then two smaller ramps were placed against the boats carrying the Jeep and the driver then drove the vehicle off the boats and onto the small landing place at Fort Bay. This method of landing motor vehicles was continued all the way to November 8th, 1972 at the completion of the Capt. Leo A.I. Chance pier at Fort Bay.

In 1951 the road reached St. John’s. At that time there were three motor vehicles on the island.

Island Administrator Max Huith  on horseback inspecting the progress of the road headed to the village of St. John’s around 1949

In 1952 there were 9 motor vehicles on the island.

Traditional porters bringing up luggage and also freight on their heads for centuries and then got help from donkeys imported from Statia and this continued into the nineteen fifties.

The Local Councilor Mr. Erroll Hassell of Windwardside deserves much credit for the coming about of this road. When he was a Local Councilor he objected to monies being put on the budget every year to clean the old paths between the villages. Instead he said that f.10.000.—should be put on the budget to start a motor vehicular road from the Fort Bay to The Bottom and then on from there to connect the other villages. The Act. Governor objected but was overruled by the two local councilors. For some reason that amount on the Saba budget must have escaped the attention of the Governor on Curacao and the budget was approved by the Colonial Council on Curacao. With this money a start was made on the road and this was the largest Public Works project for the next twenty five years and more. After the road was finished to The Bottom the rest of the road was engineered and laid out by Mr. Josephus Lambert Hassell who took a correspondence course in engineering.

Here I am as Lt. Governor ad interim giving a speech on the occasion of the opening of the shopping arcade called “Lambee’s Place” in the location of his former home. I happen to also own his self made mahogany dining room table and several other items of furniture made by him.