Flossie’s two uncles. Captain John Thomas Hassell at the wheel of one of his schooners the “Maisie Hassell” and his brother Capt. William Benjamin Hassell owner of many schooners and grandfather of the Goddard family on Barbados.

The person after whom this house was named was Flossie Hassell who was born on Sunday June 30th 1901. Her parents were John George Hassell born 1865  and Inez Elizabeth Every born 1870. Her father’s brothers were all seafarers Capt. William Benjamin “Capt. Ben” who is the grandfather of the famous Goddard family of Barbados, Capt. Abraham who bought and sold schooners to the West Indies from the East Coast of the United States, Capt. John Thomas Hassell, who owned famous schooners like the “Maisie” and Mr. Carl who sailed with his brothers but who later had a grocery store where the restaurant the “Swinging Doors” is now located. Mr. Carl Hassell’s life story and that of his family is also recorded in the book “Saba Silhouettes” and is a very interesting read as well.

Flossie’s father “johnny Hassell” was a cook on a large American schooner which was destroyed on May 8th, 1902 when Mount Pele erupted and destroyed not only the lovely city of St. Pierre but also those ships which remained in the harbour so Flossie never knew her father. Her mother survived until the age of 83 and died on June 20th, 1951.

She had three other siblings one named Ruby who was born on October 28th, 1898 who later emigrated to the United States and after having a son she died of pneumonia. Another sister Elva who was born on September 20th, 1896 but because of the trauma of the loss of her father and the hardships which followed she was committed to a mental institute on Curacao and died there.

And then Volney (also spelled Valney) who was born blind on Sunday October 14th, 1894 and had to survive from farming the land.

Flossie lived a quiet hardworking life doing her Saba lace work or “Spanish Work” which when Ruby was alive would be sent to her to try and sell in the United States while she was still alive. Afterwards she had correspondence friends who would try and help her out with selling her fine thread work. Later on when tourists started coming to Saba she would sell to them as well. 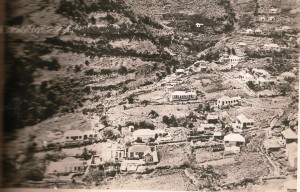 Picture of Under-the-Hill in Windwardside taken between 1870 and 1875.

Her brother Volney aka “Bungie” had a long interview with Dr. Julian Gorham Crane in her book “Saba Silhouettes” from which we will quote for this short history of the house.

The earliest known photo of this area known as “Under-the-Hill” is from around 1870 to 1875. Flossie’s cottage does not appear in that photo but there is another older house to the West of Flossie’s cottage. Traditionally on Saba when couples were getting married the groom would build a house before the wedding. Flossie’s parents got married on Wednesday January 7th 1894 and so the house would have been built around 1893.

In his interview with Dr. Julia G. Crane in “Saba Silhouettes” Volney Hasell has the following to say: “Well, there was four of we. Well, I’m the eldest, then Elva. But now you see, we had a hard time! She’s in Curacao in the asylum, you know. I suppose, well, call it thirty years maybe. Well, then our next sister, she went to America and she died out there. Her name was Ruby. She was married, but only one child. He’s in California. And Flossie. So then, well, we all beginned.”

Harbour traffic at the lovely city of St. Pierre Martinique. On May 8th, 1902 Mount Pele in the background erupted and killed John George Hassell and forty thousand other people. He may have very well been on one of these schooners pictured here.

This is what was left of the lovely and liveliest city of the West Indies, St. Pierre on the island of Martinique after Mt. Pelé erupted on May 8th 1902.

“Our father got blowed up into a eruption up here. He sailed out, you know, not no steamers, a schooner, from America out to all the islands out here. And the accident happened into Martinique. Volcano. And, you know, they could see the smoke from down here – the lava in the air, yeah, and he was into that. Yeah, he was into the schooner. Well, the other schooners cleared out. It must be what’s to be. All the other schooners cleared, but the one that he was on the captain wouldn’t go. He wouldn’t go and well, that’s what happened. Flossie was nine months, and I was about six years, I believe it was; but I don’t know nothin’ about him – can’t remember, ‘cause he was all the time to sea. He come home a couple of times. I believe I can remember once when he was home, and that’s about all.” 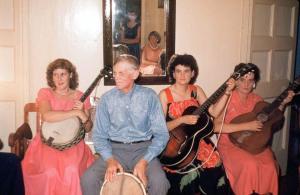 Volney Hassell blind from birth here playing his drum which he made himself. To his left on the banjo Aileen Johnson and to his right Aggie Peterson and Melanie Johnson on the guitars. In the mirror reflection Heather and Jean Every.

In” Saba Silhouettes” Volney aka “Bungie” goes on to tell us how life was for him and his family. Making Panama hats from scratch, planting, how to make a drum, and all sorts of interesting stories. One must remember that he was blind from birth and survived from farming. He explains all of that too in his interview. Since no one makes drums anymore I will end with “Bungie” telling us how to make a drum.

“And then we turned to then to make the drums, ye see. I’ve had so many now that I can’t tell you how many. I’m going to tell you now, the very first one that I had I might’ve been about eight to ten years . Right. Just about that. Well, and then we’d roll on from then, accordin’ to the saying. I never made my first one; a colored fella made it for me, but it wasn’t made so good as the one that I got now. Well, I’m goin’ tell you now, all right. Well now, ye see, we always looks for it to have a thin skin, ye know. They claim that it sounds the best. 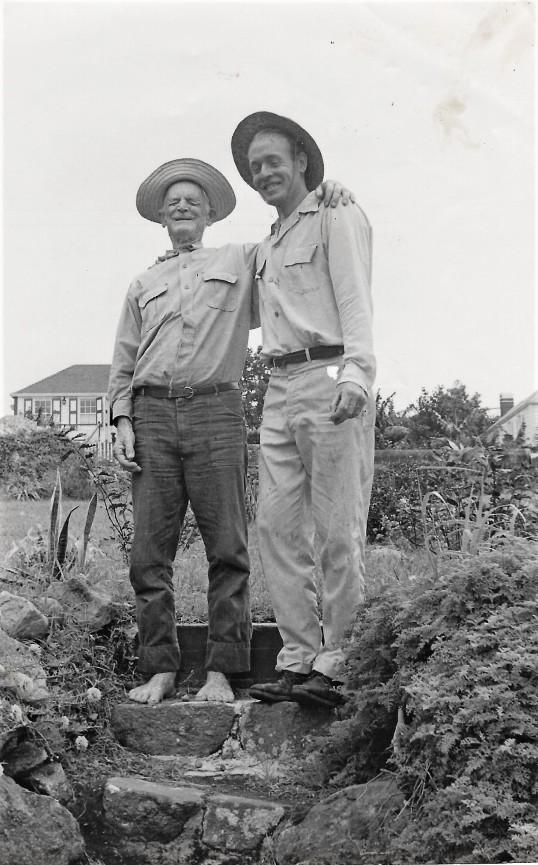 Volney Hassell on the left with his friend David McClean Johnson

“We can make ‘em out of the sheepskin and the goatskin too, ye see; but I don’t eat no sheep and I can’t handle it. I can’t make up my mind to handle the sheepskin, ye know. So all right then, we dries the skin. I makes mine out of the goat’s skin, but not out of the sheep. They claims the sheepskin sounds the best, but I can’t, I can’t make it up in my mind to do it. You see, we nail them up to the side of the house; we spread them out so that the skin don’t wrinkle ye see. Well then, after the skin is dry, we takes it then with our knife and we scrapes it. We bores the holes, ye see, into the keg, a nail keg. What the nails comes into. Mine is the best, Well, I’ll tell you, it all depends on the quality of the wood, ye know. This of mine is a heavy wood, and James and theirs is more lighter like, a herring keg. Well now, all right. So the skin is scraped, so we’s goin’ to put the skin on today. We takes it and we puts it down in water and soaks it – sometimes they stinks too! Then we soaks it down good, you know, till it comes dead slap, and then we spreads it o’er the keg. And then a couple o’ we, we pulls it down tight.

Now you want to know the name of the wood we puts for the hoops? All right, now the pegs is guava, the hoops is man-o-war; we has to have that particular wood, because it can double good. Ye see, there can’t be no curves in the skin. So then when we puts on the skin, and we puts the hoop o’er it, we takes our knife and chucks in the skin like that-keeps putting, in the skin like that. So then we takes the next hoop and we ties it. There’s two hoops, ye see. Then we ties the rope to the hoop, and then you puts one of the guava sticks and you brings the rope up and you keeps goin’ round like that from peg to peg. And you brings your rope up and you keeps goin’, comin’’round with the rope like that, ye see. Well a hatchet or a hammer you keeps knocking on that. Them hoops keeps goin, down till it brings her tight. Puts her up, and then the next day, when she’s dried, I wiggles with joy. I wets her with alcohol, you know, and that makes her sound good. You can put it on any time. That dries right off, you know, and that makes the sound.”

And so thanks to “Bungy” blind from birth we know how to make a drum. He and his sister Flossie lived in the house until they died.

Jeep coming up from Captains Quarters Hotel. To the left is Flossie’s cottage and to the right is Miss Marguerite’s cottage.