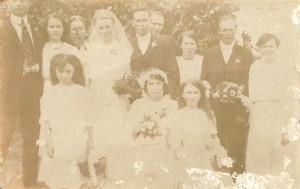 Capt. Charles Reuben Simmons on his wedding day in 1919 to Sylvia Otillia Johnson.

When he was around 93 (yes ninety three) I asked him to recite for me the alphabet he used to teach us when we were children.

This is what he told me. He had it all in his head and needed no prodding to remember it.

A, was an archer who shot at a frog.

B, was a butcher who had a great dog.

C, was a Captain who felt very big.

D, was a doctor who rode on a gig.

E, was an engineer lever at hand.

F, was a farmer who ploughed in his land.

G, was a gurgler like a pig in his habits.

H, was a hunter who goes after rabbits.

I, was an Indian fond of the chase.

J, was a jockey who rode in a race.

K, for a King mighty and grand.

L, was a lady with her white gloved hand.

M, was a miser who hoards up his gold.

N, was a newsboy who wore an extra sole.

O, was an organ the largest in town

P, was a parson who wore a black gown.

Q, for a quarrel silly boy on the spot.

R, was a racket used as a bat.

S, was a sailor who long been afloat.

T, for a tailor who mended a coat.

U, was an umbrella rather spoiled by the breeze.

V, for a vase missing valise.

W, was a watchman who came on the spot.

X, was a ten dollar bill which he got.

Y, was a yacht with her white sail spread over.

Z, was a zanny without brains in his head.

This must have been the way to teach sailors the alphabet when Capt. Charles Reuben Simmons sailed the ocean seas.